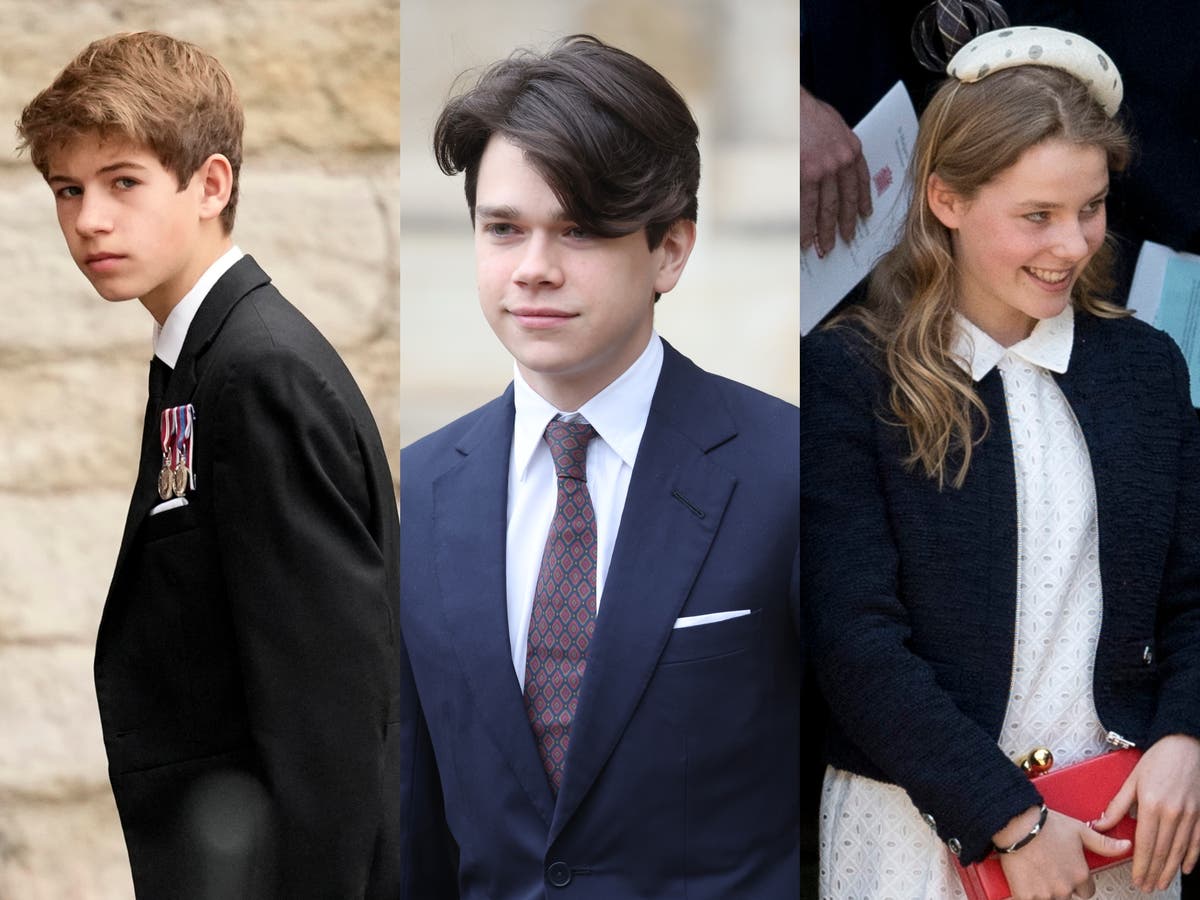 The British royal family is a large one, with King Charles III taking his spot at the very top of the family tree following the death of his mother, Queen Elizabeth II.

The immediate members of the late Queen’s family are well-known to most Britons, including her four children, eight grandchildren, and 12 great-grandchildren.

However, there are a number of lesser-known royals who are the descendants of the Queen’s sister, Princess Margaret, as well as from her uncles and cousins.

While most of the British public know the King, the Princess Royal, the Duke of York, and The Earl of Wessex, as well as the Prince of Wales and his younger brother, the Duke of Sussex, other members of the extended royal family are of a younger generation and do not appear in public often, if at all.

But who are they, and how are they related to the Queen?

Lady Louise Windsor is the 18-year-old daughter and eldest child of Prince Edward and Sophie, Countess of Wessex.

Of all the lesser-known young royals, she is the most well-known and has appeared in public on a number of occasions over the years. She made an appearance during the historic vigil of the grandchildren on Saturday (16 September), when she stood around the Queen’s coffin with her younger brother and cousins.

She is 15th in line to the throne. Louise was born with a rare eye condition called esotropia, which causes people’s eyes to look in different directions.

Following in the footsteps of her cousin, the Prince of Wales, Louise attends St Andrews University in Scotland, where she studies English.

Although James, Viscount Severn, is the son of Prince Edward and Sophie, Countess of Wessex, he has largely kept out of the public eye.

However, the 14-year-old joined his sister and cousins in standing vigil around the Queen’s coffin on Saturday night.

James is the eighth and youngest grandchild of the Queen, born in December 2007.

He is currently 13th in line to the throne. James was last spotted in public at the Queen’s platinum jubilee for the Trooping the Colour parade, and also attended the weddings of the Duke and Duchess of Sussex and Princess Eugenie and Jack Brooksbank, which both took place in 2018.

Samuel Chatto, 26, is the elder son of Lady Sarah Chatto and Daniel Chatto. His mother is the only daughter of Princess Margaret, the Queen’s sister – which means the Queen was his grand aunt.

He studied History of Art at Edinburgh University from 2014 to 2018 and now works as a sculptor based in West Sussex.

Samuel proudly displays his ceramic creations on his Instagram account. He also joined the Royal Drawing School in 2019, where his biography describes him as having “a highly individualistic practice, where both the subjects of his work and the materials he uses display his deep connection to the landscape around him”.

He is also a trained yoga instructor and completed six weeks’ worth of professional training in India in 2019.

From 2009 to 2015, he was a page of honour to the Queen, his grand aunt. This ceremonial position meant he attended state occasions, but did not have any daily duties.

Like his big brother, he also studied History of Art at Edinburgh University. While living in Edinburgh, he worked as a personal trainer at BoundFitness gym.

Arthur joined the Royal Marines in September 2021 and appeared at the Queen’s service of thanksgiving during her platinum jubilee celebrations in June wearing his uniform.

David is the only son and eldest child of Princess Margaret, and brother of Lady Sarah Chatto. This makes the Queen Charles’ grand-aunt.

Charles lived with his parents David and Serena Stanhope, Countess of Snowdon, at Kensington Palace from 2000 to 2002 during Margaret’s final years.

The 23-year-old attended Eton College and was in the same year as his cousin, Arthur Chatto. He went on to study Product Design Engineering at Loughborough University, according to his LinkedIn profile.

He was last seen with the late Queen in public in 2019 at a church service in Balmoral.

The 18-year-old Lady Margarita Armstrong-Jones is the younger sister of Charles Armstrong-Jones and the youngest child of the Earl and Countess of Snowdon. She is also the only granddaughter of the late Princess Margaret.

She is 27th in the line of succession to the throne, after her brother and Zara Tindall’s children.

According to her LinkedIn account, Margarita is currently studying at Oxford Brookes University.

When she was just eight years old, Margarita was a bridesmaid at the Prince and Princess of Wales’ wedding in 2011, along with her cousin Lady Louise Windsor, The Queen Consort’s granddaughter Eliza Lopes, and Grace van Cutsem.

Edward Windsor, 33, is the eldest child of George Windsor, Earl of St Andrews, and Sylvana, Countess of St Andrews. His grandfather is the Duke of Kent, Queen Elizabeth II’s paternal first cousin. Diana, Princess of Wales, was his godmother.

He is second in line to the Dukedom of Kent and uses one of his grandfather’s subsidiary titles, Baron Downpatrick, by courtesy. However, he is not in the line of succession due to being a Roman Catholic.

Like many other members of his family, he attended Eton College before matriculating to Keble College in Oxford, where he studies Modern Languages.

Edward works as a fashion designer and founded his own label FIDIR, a menswear brand that is inspired by the Scottish Highlands.

The younger sister of Edward Windsor, Lady Marina Windsor is the second child of the Earl and Countess of St Andrews.

She was born on 30 September 1992 and was named after her great-grandmother, Princess Marina of Greece and Denmark.

Marina is also not in the line of succession as she was confirmed into the Roman Catholic Church in 2008.

She attended St Mary’s Ascot school before going to the University of Edinburgh to study French and Portuguese.

She keeps a low profile and it is not known if she currently holds a job. In 2010, she modelled alongside her siblings in Tatler magazine, but later expressed an interest in foreign diplomacy instead of a modelling career.

Lady Amelia Windsor is the youngest child of the Earl and Countess of St Andrews and is 27 years old.

She is the only one of her siblings to still be included in the line of succession, and comes in at number 43.

As a fashion model, Amelia’s social media presence is the most public of her siblings, with more than 87,000 followers on Instagram. She is represented by Storm Model Management and walked the runway for Dolce & Gabbana in 2017 and 2019.

She also appeared on the cover of Tatler in 2016 and Vogue Japan in 2017. Amelia is also a contributing fashion editor at Tatler.com and became the spokesmodel for makeup brand Illamasqua in 2018.

Columbus Taylor is one of four children belonging to Lady Helen Taylor, daughter of the Duke and Duchess of Kent and great-granddaughter of King George V. His father is art dealer Timothy Taylor.

He is 48th in the line of succession. While little is known about Columbus’ private and professional life, it is thought that he currently resides in New York.

The 24-year-old son of Lady Helen Taylor and Timothy Taylor often posts on his Instagram account about attending festivals and events. He studied at Wellington College in Berkshire before pursuing Arts Management at Goldsmiths, University of London.

He is currently pursuing a career in music, having previously dabbled in the arts by working part-time at his father’s art gallery in Mayfair.

Flora Vesterberg is the daughter of James Ogilvy. Not to be confused with advertising tycoon David Ogilvy, James is the only son of Sir Angus Ogilvy and Princess Alexandra of Kent, who is the Queen’s first cousin.

Alexandra’s father is Prince George, Duke of Kent, and her mother Princess Marina of Greece and Denmark.

The Succession to the Crown Act applies to royal children born after 28 October 201.

She changed her name from Ogilvy to Vesterberg after marrying her husband, financier Timothy Vesterberg, in September 2021.

Flora studied History of Art at Bristol University from 2013 to 2016 and became an ambassador for the Victoria & Albert Museum’s Young Patrons’ Circle last December.

Born in 1996, the younger brother of Flora Vesterberg, is rarely seen at official royal events – except at Trooping the Colour, which he attends nearly every year.

Zenouska Mowatt is the eldest of two children belonging to Marina Ogilvy, the daughter of Princess Alexandra. She is close to Princess Eugenie, the younger daughter of the Duke of York, and attended her wedding to Jack Brooksbank in 2018.

The 32-year-old lives in London and works as the head of marketing at luxury goods maker Halcyon Days, which holds all three Royal Warrants to the royal household. A look at her Instagram account shows she is often in the company of Flora Vesterberg.