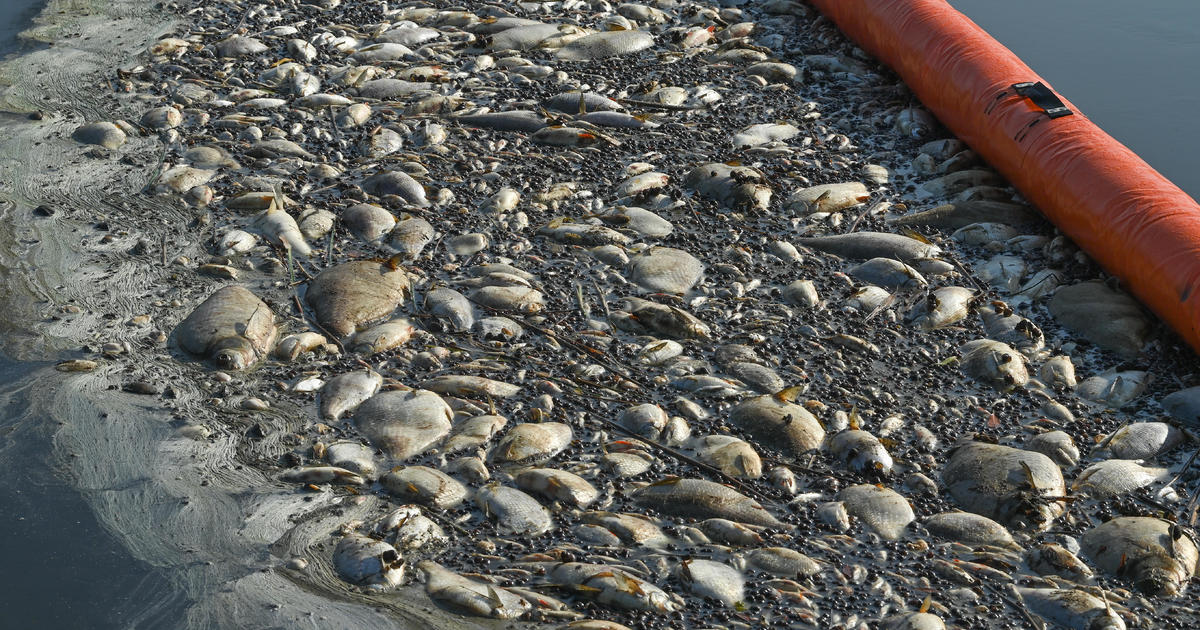 Berlin — A river on the German-Polish border has become a mass grave. Volunteers and authorities have been busy for days removing tons of dead fish floating on the surface of the Oder River.

The cause of the massive die-off, which has affected a stretch of the river more than 300 miles long, remains a mystery, but Sascha Maier, a water policy officer at the BUND environmental organization, told CBS News on Wednesday that “everything points to a manmade catastrophe.”

Authorities are struggling to find answers.

More than 500 firefighters are taking part in the efforts to clean up the mess on the Polish side of the river. Maier said at least 110 tons of dead fish had been removed from the river as of Wednesday. A sample of about 100 of the carcasses were taken for investigation, while the rest was to be burned at a dedicated site in Germany.

Poland’s government says no toxic substances have been found in water samples from the Oder, and Environment Minister Anna Moskwa said there was no evidence of pesticides in samples from the dead fish.

The government has offered three hypotheses.

The first is that some still-unknown toxic substance got into the riverwater through either an intentional or accidental discharge from an industrial plant along the Oder, or that someone illegally dumped a toxin into the river.

The second thesis is that the cause was natural. Poland and Germany, like most of Europe, have sweltered through record high temperatures, and low water levels have increased concentrations of pollutants this summer. The Polish environmental agency is investigating all circumstances that could explain higher salinity and water temperatures observed in the Oder, Moskwa said.

The third possibility being investigated is the discharge of a large amount of industrial water containing chlorine into the river. Moskwa said if there was a release of chlorine into the water, it could have settled and contaminated river bottom sediments, which can put wildlife at risk.

The massive fish kill was first noted by locals in Poland on July 28, around the city of Wroclaw.

“One thing is clear, the water in the Oder River is polluted, only with what is not clear so far,” Maier, of the German group BUND told CBS News. “Elevated salt and oxygen levels have been detected in the water.”

The cause of the higher salinity and water temperatures hasn’t been confirmed, or definitively linked to the mass die-off of fish.

The German Environment Ministry has ruled out mercury contamination as the cause.

Polish officials suspect the river was contaminated with chemical waste. Prime Minister Mateusz Morawiecki has offered a reward of 1 million zloty (about $218,000) to anyone who an identify the cause.

It’s not only fish affected by the mystery contaminant. Many other animals, including mussels and small vertebrates in and around the river have also suffered, Maier told CBS News. There’s also a risk that the as-yet-unidentified toxin could be absorbed into the food chain and affect even more species — even animals destined for human consumption.

“We have seen that other animal species, such as eagles or even raccoons, eat the carcasses,” Maier said, and farmers have long used water from the Oder all along the river valley for their sheep and cattle.

Authorities strongly advise against use the Oder’s water for livestock right now, forcing farmers to look for alternatives.

The International Commission for the Protection of the Oder River (ICPO), an organization that sees delegations from Czechia [also known as the Czech Republic), Poland and Germany cooperate to protect the waterway, has working groups dedicated to raising the alarm in cases such as this. According to their plans, so-called International Main Warning Centers are situated along the river in all three countries and are supposed to pass on reports of pollution or damage in a relay of information aimed at giving early warning to locations downstream.

But that apparently didn’t happen as intended. In Brandenburg, Germany, the fish kill has only been monitored since August 10, and people there were caught unprepared.

“There was no advance warning from Poland, although the fish kill had been known there for two weeks at that point,” a spokesman for the German Environment Ministry said Monday.

Why the reporting chain didn’t function as intended also remains unclear. German’s Federal Environment Ministry said the responsible working group would hold a special meeting on August 18 to look into the matter.

Whatever the contamination is, it hit an ecosystem that was already under great stress this summer, Maier told CBS News, thanks to the weeks of extreme heat and hardly any rainfall. Those conditions have very likely exacerbated the problem, at least, because the lower water volume means a higher concentration of any toxic substances present.

“Because of the low water, we have a warm Oder River,” he said. That alone can cause significant physical stress for many fish species, and “if pollution is then added, they are less resistant.”

Maier said an ongoing infrastructure project, funded by the World Bank, to expand the bed of the Oder on the Polish side is also a source of stress for the river’s wildlife, and a possible cause of its contamination.

After a meeting of Polish and German government representatives, the German Environment Ministry said Monday that experts from both countries would work closely together to find the cause of the problem.