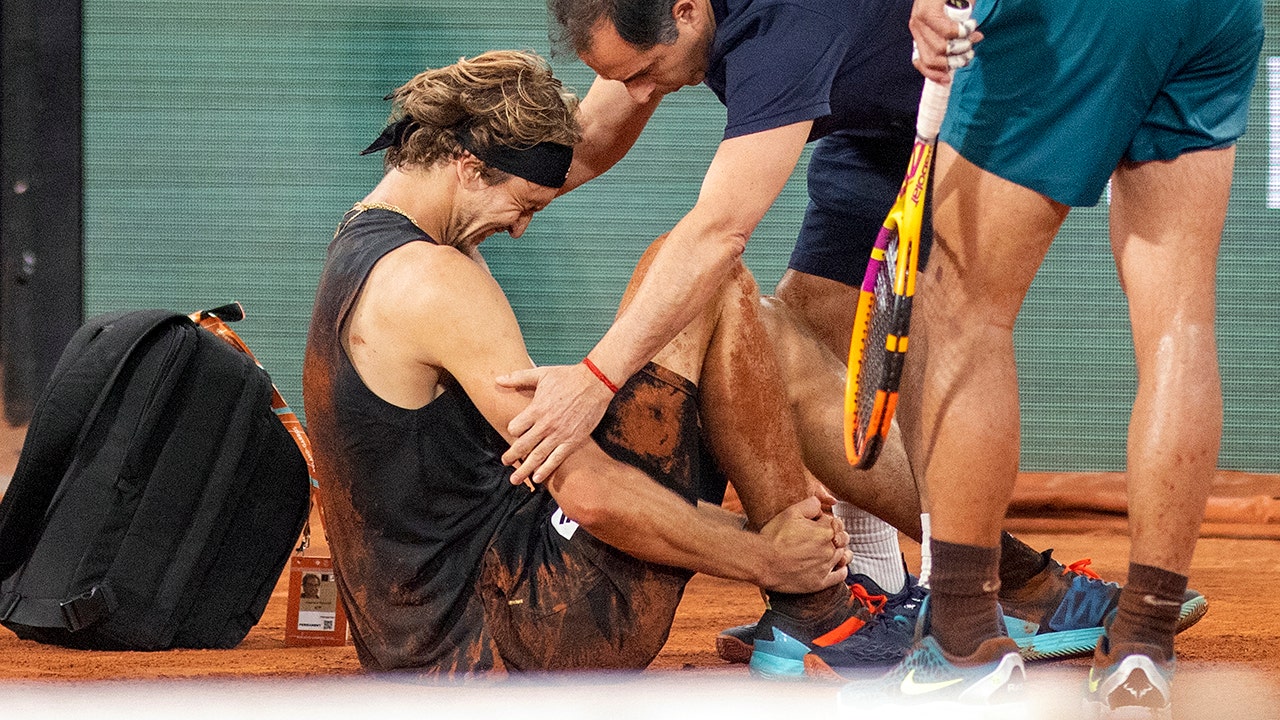 Rafael Nadal is one match away from extending his record of wins at the French Open to 14 titles after Alexander Zverev was forced to retire from their semifinal match on Thursday after appearing to roll his ankle.

Nadal and Zverev were playing a grueling three-hour match that was still into the second set when the German tennis player dropped to the floor in agony after running to chase a shot.

An injured Alexander Zverev of Germany holds his ankle after falling resulting in his retirement as Rafael Nadal of Spain looks on during the Singles Semi-Final match on Court Philippe Chatrier at the 2022 French Open Tennis Tournament at Roland Garros on June 3rd 2022 in Paris, France.
(Photo by Tim Clayton/Corbis via Getty Images)

As a trainer tended to Zverev, who appeared to be rolling on the clay court in pain while grabbing at his right ankle, Nadal came from around the net to check on his opponent.

“Only thing that I can say is I hope he’s not too bad. Hopefully it’s just the normal thing when you turn your ankle, and hopefully nothing (is broken). That’s what everybody hopes,” Nadal said after the match. “Even if for me it’s a dream to be in the final of Roland Garros. Of course that way is not the way that we want it to be… If you are human, you should feel very sorry for a colleague.”

Zverev was taken off the court in a wheelchair but returned several minutes later on crutches to finally retire from the match and bid the crowd a Roland Garros farewell.

​​”He was very unlucky,” Nadal said. “The only thing that I am sure is he is going to win not one — much more than one. So I wish him all the best and a very fast recovery.”

An injured Alexander Zverev of Germany in agony holds his ankle after falling resulting in his retirement as Rafael Nadal of Spain looks on during the Singles Semi-Final match on Court Philippe Chatrier at the 2022 French Open Tennis Tournament at Roland Garros on June 3, 2022 in Paris, France.
(Tim Clayton/Corbis via Getty Images)

Nadal himself has been dealing with chronic pain in his left foot, an issue that even had him initially questioning if he would be able to play in Paris. But after coming off a pair of victories that each lasted more than four hours, he showed no signs of age, injury or fatigue on Thursday.

Germany’s Alexander Zverev (R) walks with crutches next to Spain’s Rafael Nadal on court after being injured during his men’s semi-final singles match on day thirteen of the Roland-Garros Open tennis tournament at the Court Philippe-Chatrier in Paris on June 3, 2022.
(ANNE-CHRISTINE POUJOULAT/AFP via Getty Images)

Nadal will take on Casper Ruud in the men’s final on Sunday where he will have a chance to extend both his records of wins at the French Open and Grand Slam titles.