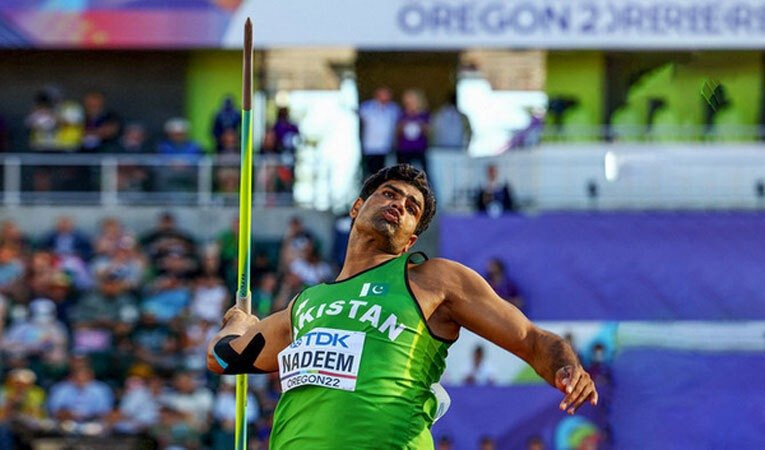 
“It is hurting the same way still,” says Pakistan’s history-making javelin thrower Arshad Nadeem, as he will be looking to elate the nation despite the continuous pain with another podium finish this month 2022 at the Islamic Solidarity Games in the city of Rumi, Konya on Friday evening.

The 25-year-old made the Commonwealth Games record and became the first South Asian to cross the 90-metre barrier on August 7.

This was also the second time that any Asian broke the 90-metre barrier at the Games.

Arshad left Birmingham just the next day after the history-making night, where he threw 90.18m in the presence of World Athletics Champion Grenada’s Anderson Peters. He did it despite a long-standing elbow injury that he had sustained during the preparations for Tokyo Olympics last year and then another injury in the knee that he picked during the training few months ago.

Arshad pulled off a miracle performance that enchanted the entire nation.

His immediate assignment is in Konya where he won the bronze medal at his debut in the games back in 2017.

“It is not fine,” Arshad told The Express Tribune in a brief interaction before his event in Konya when asked about the pain in his elbow.

Arshad had been working tirelessly with the doctors as well. In Konya he has UK-based Ali Bajwa but during the CWGs, he also had the Pakistan Olympic Association medical committee member Dr Asad Abbas, who had been treating him since last year before the Olympics.

Arshad has lived through the pain just to win the gold medal at the Commonwealth Games.

When pain becomes the medium

Arshad is doing the same he did in Birmingham now. When he won the gold with a fifth throw, a massive 90.18m, and even before he kept subconsciously touching his heavily taped elbow constantly, and that was felt by everyone witnessing the history.

He found motivation in pain, pushing his body but imposing his will through.

“My injury has not been better,” said Arshad. “It is still the same and hurts the same way as before [in the Commonwealth Games].”

When asked about the preparation too, he added that it is not very well.

“There has not been any improvement since Commonwealth Games,” said Arshad.

The history of the competition is very much on Arshad’s side. The Islamic Solidarity Games record is 83.45m that was made by Qatar’s Ahmed Bader Magour in 2017. Arshad took the bronze that time. However now, Arshad’s most unimpressive throw is around 80m or above.

Arshad pulled off 86.18m at the Athletics Championships as well in July before going to Birmingham. The championships were Arshad’s comeback event since the Tokyo Olympics.

Cheering for the hero

Pakistan’s top woman javelin thrower Fatima Hussain who also trained with Arshad in the past believes that Arshad can do it again despite all the odds.

“Arshad can make history again. I was looking at other opponents in Islamic Games and none of them are good enough for him,” said Fatima.

“I felt the pain that Arshad felt. We were all concerned when he was playing the Commonwealth Games final. He won that gold medal exceeding all of our expectations. I was not sure he could do it, but then he had that 90.18m throw and that was everything.”

Fatima added that she feels proud of her fellow javelin thrower for fighting for the nation for performing for his people.

“He did it with all that pain, and it brings tears to my eyes,” said Fatima as she prepares to watch Arshad take the field in Konya.