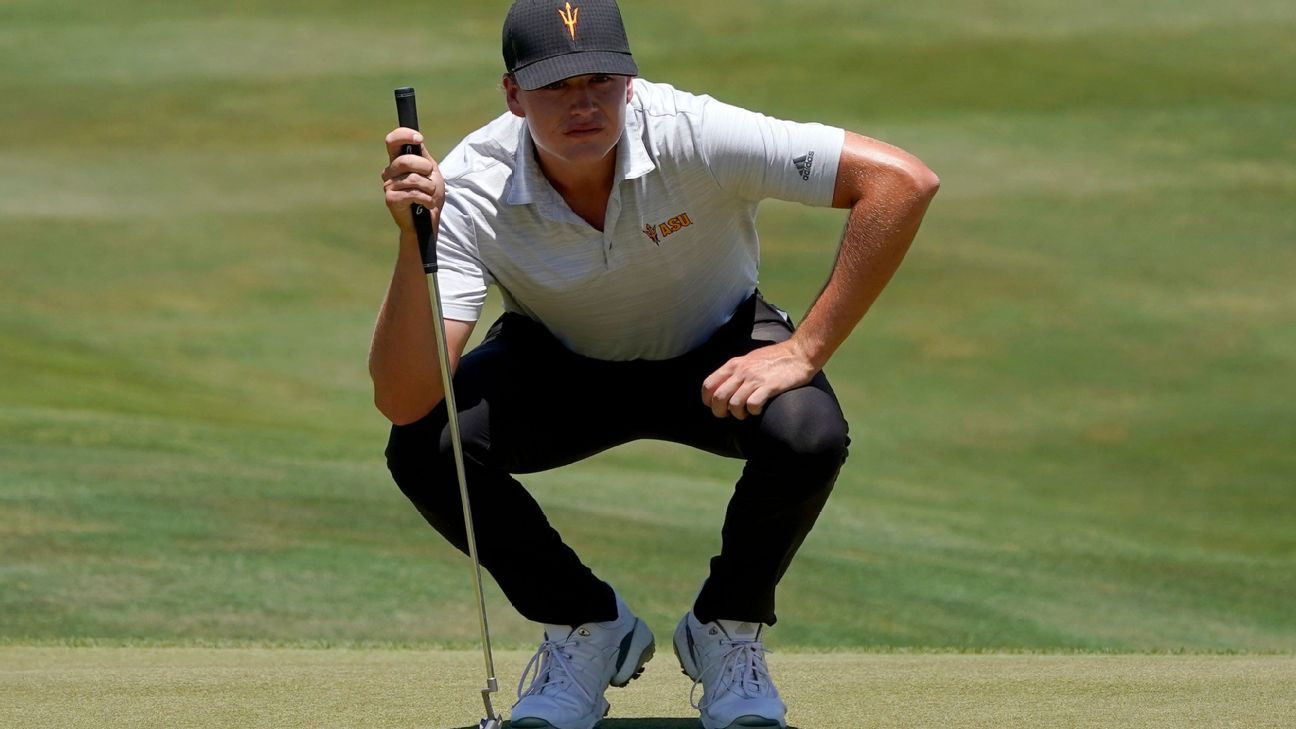 The Longhorns are back in the title match, and this time they don’t have to worry about tornadoes. This year’s tournament is in the desert, not Arkansas.

Texas beat Vanderbilt 3½-1½ on Tuesday to earn a spot in the championship match against Arizona State, giving its seniors a second shot at winning a national title.

Pierceson Coody and Travis Vick closed out their matches seconds apart at Grayhawk Golf Club, sending the Longhorns to the championship match for the third time in six years. Arizona State beat reigning national champion Pepperdine 4-1 when Preston Summerhays birdied the 18th hole to close out his match 2 up.

“It’s debatable whether weather decided the 2019 national championship,” Texas coach John Fields said. “Whether it did or didn’t doesn’t matter because we’ve got a chance to play. This is what these guys dream of. This is where they want to be.” ,

It’s been a long wait.

Texas lost the 2019 title match to Stanford in Fayetteville, Arkansas, where tee times were moved up to avoid potential tornadoes in the afternoon. The 2020 tournament was wiped out due to the pandemic and the Longhorns never seemed to find their footing in 2021.

Led by seniors Cole Hammer and twins Pierceson and Parker Moody, Texas was one of the nation’s best teams all season, but felt pressure along the way — from regionals to top 15 and top eight at the NCAA championships.

Reaching the quarterfinals seemed to take away some of that weight.

Texas beat Oklahoma State 3-2 in the quarterfinals and had four close matches against Vanderbilt heading to the back nine at Grayhawk’s Raptor Course.

Cole Hammer beat Vandy freshman Gordon Sargent, who won the NCAA individual title on Monday, 4 and 3 to give Texas the first point in the second semifinal.

Vandy’s William Moll then closed out his match 1 up with a bogey on No. 18 when Parker Coody couldn’t get up and down from a greenside bunker.

“What I’ve noticed is they’ve freed up, they’re enjoying what they’re doing here,” Fields said. “I’m particularly proud of the fact that they worked so hard to get here, but at the same time they’re enjoying it.”

So are the Sun Devils.

Arizona State lost to Oklahoma in the semifinals as the top seed a year ago and turned the tables on the second-seeded Sooners to win 3-2 in the morning quarterfinals.

The Sun Devils led Pepperdine big in three matches early in the afternoon semifinals, let the Waves creep back in and closed with a flourish.

“I’m just happy that our guys have it inside of them to hit the big shots in the big moments, to never give up.” Arizona State coach Matt Thurmond said. “It was a pretty exciting finish today.”

Mason Andersen closed out Dylan Menante 1 up in 19 holes for Arizona State’s first point after beating Oklahoma’s Patrick Welch 1 up in the quarterfinals. David Puig then finished off Joey Vrzich 2 and 1 with a two-putt birdie after driving the short par-4 17th.

Summerhays routed Haskins Award winner Chris Gotterup 7 and 5 in quarterfinals and went 5 up on Joe Highsmith through 10 holes. Highsmith won five of six holes to tie it on No. 16, but the Arizona State freshman birdied No. 17 to go 1 up.

Summerhays, whose father and great uncle played on the PGA Tour, hit his approach shot on the 520-yard par-4 to five feet and sank the putt to win 2 up and clinch Arizona State’s spot in the finals.

“We’re a really good team and we’ve been envisioning this all year,” Summerhays said. “To be in this position, I don’t think is a surprise to us. We worked for this and expected to be here.”