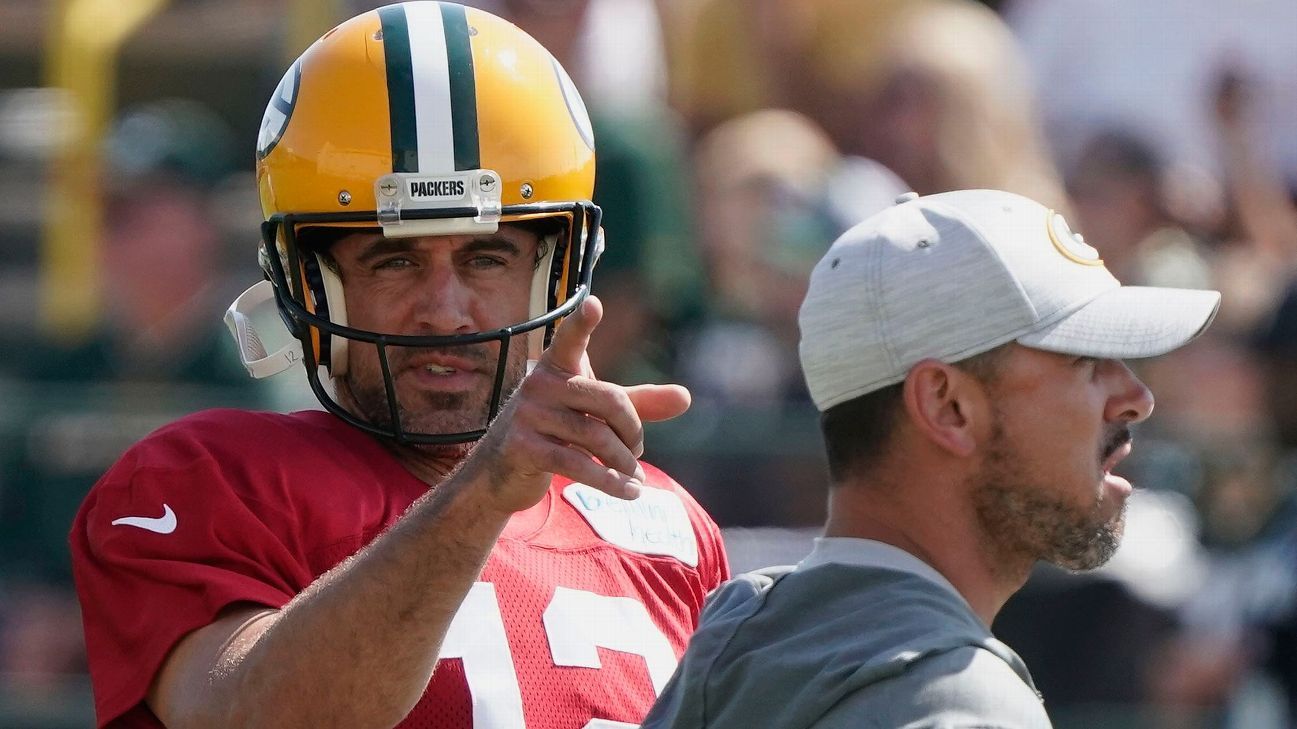 This part of the NFL training camp schedule could be called “joint practice season,” as teams are linking up in greater numbers this week. Tuesday saw the New Orleans Saints travel to Wisconsin to work out with the Green Bay Packers, and the New England Patriots and Carolina Panthers taking each other on. The San Francisco 49ers and Minnesota Vikings will also link up this week.

Along with getting to practice against other teams, joint practices see spirited competition between starters, which sometimes turns into fighting (see the Patriots writeup below). But if you’re looking for the closest simulation of regular-season play, the joint practices are it.

Here’s the rest of what you need to know from camps across the league.

Top NFL news of the day

Zach Wilson’s right knee surgery deemed a success, sources say: Jets quarterback Zach Wilson underwent arthroscopic knee surgery Tuesday in Los Angeles, and a source told ESPN that the procedure was deemed a success. There were no surprises from the original diagnosis, the source said, and the team isn’t putting a timeline on his return, but it seems to be the same as the 2-4 week range the Jets had originally envisioned.

Tyrod Taylor may get some 1st-team reps but Daniel Jones still QB1, Giants coach Brian Daboll said: The Giants might get quarterback Tyrod Taylor some first-team snaps this summer, coach Brian Daboll said on Tuesday. Taylor, however, is currently the clear-cut backup to fourth-year quarterback Daniel Jones. “I have full confidence in Daniel, and I have full confidence in Tyrod in what his role is,” Daboll said. “Each day we sit there and evaluate the guys, but will [Taylor] get a few reps here or there? He might.”

Panthers name Ikem Ekwonu starting left tackle over Brady Christensen: The Panthers aren’t ready to name a starting quarterback, but they are ready to move forward with first-round draft pick Ikem Ekwonu as their starting left tackle. Ekwonu, the sixth overall pick in the 2022 draft out of North Carolina State, opened Tuesday’s joint practice against New England as the starter over 2021 third-round pick Brady Christensen. According to coach Matt Rhule, “That’s where we are moving forward.”

Steelers WR Anthony Miller out for season due to shoulder injury: Steelers wide receiver Anthony Miller has been placed on injured reserve and is out for the year after sustaining a shoulder injury in practice before the team’s first preseason game. Miller, 27, had a good showing in training camp, and he especially displayed good chemistry with quarterback Mitch Trubisky, with whom he played in Chicago for three seasons. Miller didn’t play in the Steelers’ preseason win against Seattle and was spotted with a brace and immobilizer on his shoulder and arm after the game.

Dolphins place Adam Shaheen on IR after voided trade: The Dolphins placed tight end Adam Shaheen on injured reserve Tuesday after he failed a physical last week because of a preexisting knee injury, which voided a trade with the Houston Texans. Dolphins coach Mike McDaniel said Tuesday that Shaheen will undergo surgery after getting more opinions on his knee and the organization is “100% supportive” of his decision.

New York Jets: Joe Flacco, in his third practice as the Jets’ temporary QB1, delivered his best performance. Unofficially, he completed 14 of 17 passes in 11-on-11 periods, hitting 10 in a row at one point and spreading the ball to seven different receivers. His best throw was a deep out to Elijah Moore — a frozen rope that showed he still has a fastball at age 37. WR Garrett Wilson, asked to compare Flacco and injured Zach Wilson, said Flacco throws “receiver friendly” passes because he “takes some pace off the ball” on certain routes. That comes with experience — a lot of experience. — Rich Cimini

Los Angeles Chargers: With five practices remaining in training camp, including combined practices against the Dallas Cowboys over the next two days, All-Pro safety Derwin James Jr.’s hold-in continues. James is entering the fifth and final season of his rookie deal, is scheduled to earn slightly more than $9 million and is due a contract extension. Chargers coach Brandon Staley expressed confidence Tuesday that – if a deal gets done — James would be in “football shape” and ready for the season, despite having the end of training camp within sight. “I don’t worry about Derwin James,” Staley said. “There’s no one who has more pride in his performance and his ability to be in shape, mentally and physically, to do the job at the highest level than him… no matter when this happens, Derwin is going to be ready.” James continues to participate in walk-throughs and runs through agility drills individually before maintaining a constant presence on the sideline throughout practices. — Lindsey Thiry

Carolina Panthers: Baker Mayfield didn’t do much, if anything, to separate himself from Sam Darnold in the competition for the starting quarterback job in Tuesday’s joint practice against New England. He completed only one of his first six pass attempts in 1-on-1 drills between the wide receivers and cornerbacks. He was 3-for-10 in his final series, a two-minute drill. But he did complete a pass of more than 45 yards to DJ Moore that got the fans excited and had another big pass to running back Christian McCaffrey that turned heads just enough to say it wasn’t a bad day. He also hasn’t let his sometimes boisterous personality overshadow his progress on the field. “I haven’t been surprised by it. I’ve been really impressed by it,” coach Matt Rhule said of Mayfield’s demeanor. “He’s got a natural feel for learning things, the verbiage and how fast it comes. He does a really nice job.” — David Newton

Philadelphia Eagles: Tight end Dallas Goedert is heating up. Fresh off his 22-yard touchdown catch in the preseason opener against the New York Jets, Goedert had his most prolific day of training camp. Jalen Hurts hit him with three straight completions during 7-on-7s, including one over the middle for the touchdown to cap the drive. Later, Hurts faked the handoff, rolled right, and again found Goedert in the end zone. They skied in the air for a chest bump to celebrate. — Tim McManus

Kansas City Chiefs: Justin Reid has been getting a lot of attention lately for his kicking accomplishments but made his mark on defense on Tuesday. Reid, a starting safety, intercepted two Patrick Mahomes passes during a team period. Reid cut in front of Travis Kelce to make one interception and caught a deflection off Kelce for another. Reid’s interceptions were part of a stronger effort from the defense than it showed in Monday’s practice. That was of relief to defensive coordinator Steve Spagnuolo, who has said the Chiefs were racing the clock to be ready for the regular season with their many new pieces and can’t afford to be wasting any more days. The defense recently added two significant players with the return from injury of third cornerback Rashad Fenton and the signing of defensive tackle Danny Shelton. — Adam Teicher

Ready for kickoff? Sign up now to play with friends and family. Get started >>

Washington Commanders: Linebacker Jamin Davis didn’t make much of an impact during his rookie season. But the second-year linebacker, the 19th overall pick in 2021, has started to look like he could help this season. During practice Tuesday, Davis made three consecutive plays — defending a pass to the tight end, forcing an incompletion; stopping the running back in the hole and then hustling back to pick off a tipped ball in the secondary. He did a nice job in the preseason opener vs. Carolina. Davis plays best when aligned closer to the line of scrimmage, allowing him to read less and be more aggressive attacking the ball or his gap. For this defense to improve, Davis has to show these skills during the regular season. — John Keim

Buffalo Bills: The Bills held their first full training camp practice back at the team’s facility in Orchard Park, N.Y. During the practice, rookie wide receiver Khalil Shakir came down with a catch on a perfect pass towards the sideline from quarterback Case Keenum. Shakir has continued to impress among a strong wide receiver group after catching all five of his targets for 92 yards in the win over the Colts. Offensive coordinator Ken Dorsey remarked Tuesday that he has been on top of things, including from a mental perspective.

“We felt like that he came out, and he competed, and he really kind of put his best foot forward,” Dorsey said. ” … But as a rookie wide receiver in this offense, very few metal errors, very few busted routes. I don’t think he had any. He was on top of the stuff. … We were really excited for that first step and looking forward to continuing to progress with him.” — Alaina Getzenberg

New England Patriots: In a joint practice with the Carolina Panthers that was somewhat marred by WRs Kendrick Bourne and Kristian Wilkerson being kicked out for their role in a melee (with C James Ferentz later tossed in a separate mini-tussle), one of the highlights for the Patriots was WR DeVante Parker making multiple contested catches along the sideline. He said his mentality in those situations is “if the ball is in the area, it’s mine.” He said 50-50 balls are more like 80-20s to him.” — Mike Reiss

Kadarius Toney (leg) back at practice at least doing some individual drills. pic.twitter.com/CWLtACEa1c

It’s offense vs. defense on the bags! Who comes out on top? 😂 pic.twitter.com/grbSyLJYMl

Going 🆙 on a Tuesday pic.twitter.com/wXeWgOiDOx