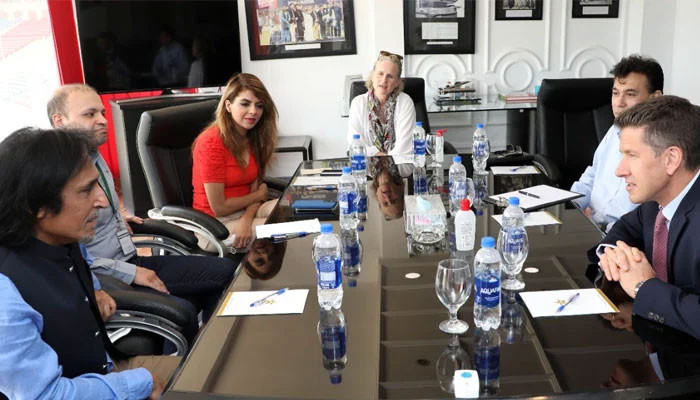 During the meeting, the two officials discussed the English cricket team’s tour to Pakistan.

“Cricket is in our blood,” Turner said, adding that the two sides are celebrating their 75 years of friendship.

“We are excited to host the Pakistan vs England series,” Ramiz said, adding that the other side’s national cricket squad has to visit Pakistan.

He said that English fans and cricket experts want to come to Pakistan to watch “sensational cricket” between the two countries.

England to visit Pakistan in September

According to international media, England’s white-ball specialists are to head to Pakistan for seven T20 matches on September 15, just 72 hours after the home international summer concludes against South Africa, and then on to Australia for three further T20s to acclimatise for the T20 World Cup.

As per the schedule, immediately after the trio of ODIs finish on November 22, England return to Pakistan to play three Tests.

England’s final Super 12 fixture is scheduled for November 5, when they will take on the winners of qualifying Group A, most likely Sri Lanka.

It is worth mentioning here that after cancelling the Pakistan tour, England and Wales Cricket Board had agreed to play seven T20 matches in the country in September this year.