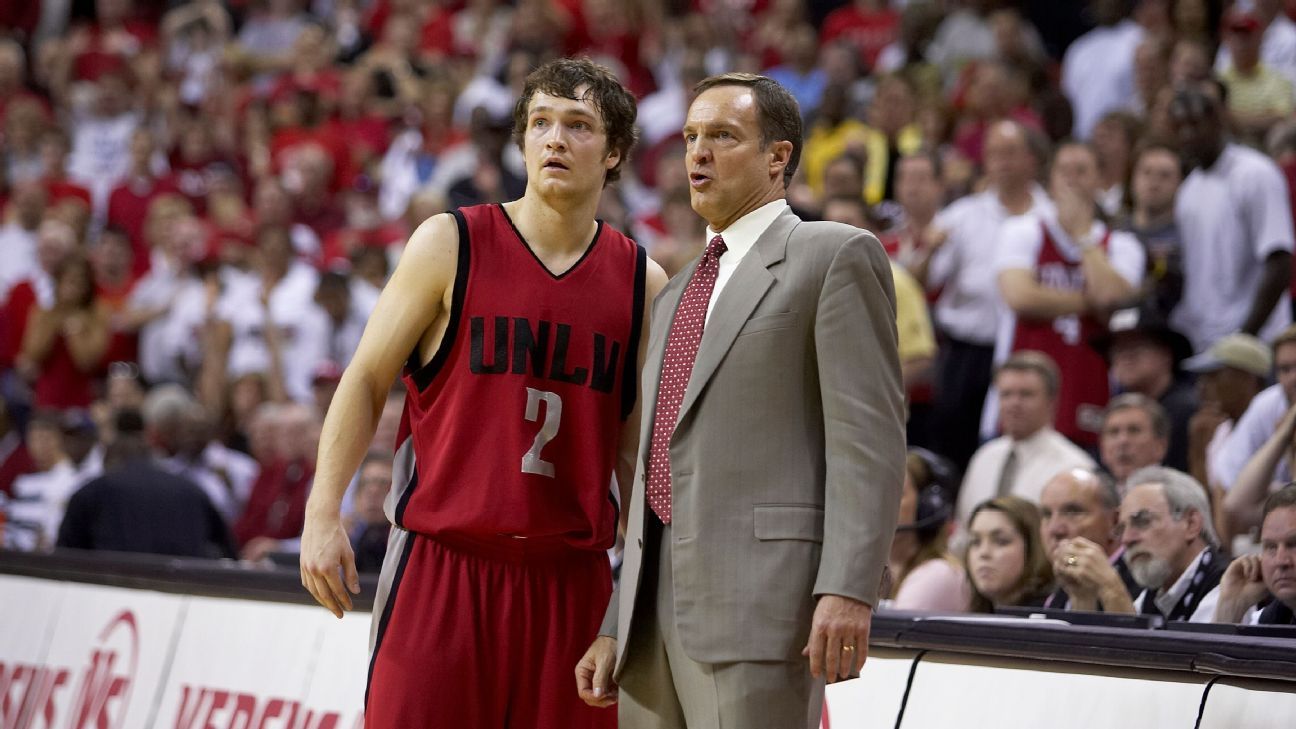 WISCONSIN BADGERS COACH Bo Ryan walked into the news conference looking unhappy. His team had just been knocked out of the second round of the 2007 NCAA tournament by UNLV, which was led by Kevin Kruger’s 16 points, six rebounds, seven assists and four 3-pointers.

Less than a year earlier, Kruger had become the first college basketball player to take advantage of the NCAA’s Rule 2005-54, which allowed him to graduate from Arizona State and transfer to UNLV to play for his father, Lon — immediately.

“I’m one of the hundreds of coaches out there who tried to stop the rule,” Ryan complained to reporters. “I [thought about] a guy like Kevin Kruger and I thought, ‘We’re liable to play those guys and he’s liable to beat us.’ I said that a year ago. Then he beat us with some big shots.”

While Lon Kruger maintains Ryan’s comments were made in jest, coaches are still bemoaning the graduate transfer rule — and the ripple effect it has had on a sport where immediate transfer eligibility is the norm — 16 years later.

So how did Kevin Kruger — now set to begin his second year as head coach at UNLV — become a transfer trailblazer within the modern college basketball landscape?

IN RETROSPECT, IT was Herb Sendek who unintentionally knocked over the first domino that set college basketball on the path it is now: nearly 500 graduate transfers in the portal and pushing 1,800 total transfers for the second consecutive season.

Sendek had just been hired at Arizona State in the spring of 2006, replacing Rob Evans after eight seasons at the helm. One of the first things Sendek did after arriving on campus was meet with the academic coordinator for men’s basketball, to gauge each player’s progress and academic situation.

Kruger stood out. He had just two classes left to graduate, and planned to take them during what was to be his final year in Tempe in 2006-07, filling in other classes to meet the eligibility requirements needed to play.

That didn’t make a ton of sense to Sendek, to take additional undergraduate classes without working toward anything. He approached the team’s top returning scorer (Kruger averaged 15.0 points in 2005-06) with an alternative: Why don’t you take your final two classes over the summer, get your undergraduate degree a year early and then work toward your master’s degree next fall and spring?

Kruger agreed, and did just that.

Had this situation happened the previous spring, Kruger would have completed his bachelor’s degree, enrolled in a graduate program and played his final college year at Arizona State.

“When I transferred, people transferred for one of three or four reasons, and minimal playing time wasn’t always one of them. There was a stigma to it. Academics? Did he get in trouble? There was a feeling of, ‘Well, why? Why would you leave?'”

While there was significant membership pushback to the legislation due to the “free agency” implications of immediately eligible transfers, the NCAA pushed back any override vote until January 2007. (The rule was indeed voted down at the 2007 NCAA convention, but remained an option via a waiver process. Then-NCAA president Myles Brand called the concerns about free agency “exaggerated” and said only about 25 players utilized the graduate transfer rule in its first several months. “Most of them were harmless, if you like,” he said in a January 2007 interview. “There were a few elite athletes, but not most of them. And those that did transfer did it for academic reasons, legitimate reasons.”)

There were plenty of coaches who similarly didn’t see it as a groundbreaking change.

“I remember not thinking too much about it,” Lon Kruger said. “I thought it might happen occasionally. Back then, in theory, you were transferring for academic reasons. You graduated, the school you were at didn’t offer the graduate degree that you were interested in. But that’s not the reason kids are doing it anymore — and it wasn’t the reason Kev did it, for that matter.”

“At that particular time, I didn’t give it a great deal of thought,” Sendek added.

That summer, as Kruger attended his final classes at Arizona State, one of his teammates asked whether he planned to look into the new NCAA rule.

The seed had officially been planted.

“All of a sudden I get a call from Kev: ‘What about this rule?'” Lon said.

From Kevin’s perspective, transferring to UNLV seemed a completely reasonable option. His father was the head coach of the Runnin’ Rebels, and the chance to play for one’s father in college is an opportunity not many would pass up. And, Rob Evans, who had recruited him to Arizona State, had been fired a couple months earlier.

There was no portal to enter, no social media announcement to draw attention to his decision, no drawn-out recruitment; if Kevin was able to make the move, he was going to do it quickly.

“Had [Evans] not been let go, I wouldn’t have done it. He gave me an opportunity,” he said. “And then my dad being the coach there — it wasn’t like I took five [school] visits.”

On July 5, Kevin informed Shay Jewett, the program’s academic advisor, and Doug Tammaro, the program’s longtime sports information director, that he planned to leave. He then called Sendek.

“He just asked if I wanted to sit down and talk about it,” Kevin said of Sendek’s reaction to the news. “I said, ‘No, I’m going to play for my dad.’ He said OK, he wished me luck. There wasn’t going to be a back and forth; he was very supportive of it.”

“It was based on my suggestion, to finish his undergraduate degree and start his master’s degree. The consequences obviously hit me,” Sendek said. “But it was still the right thing to do. It was for his benefit. I was not expecting the call on July 5th, but I think everybody would understand — I certainly did — a desire to play for your father, a legendary coach.”

And with that, college basketball’s first graduate transfer was official.

NO ONE INVOLVED recalls much fallout from Kruger’s decision.

Arizona State was put in a massive bind at the point guard position, but Sendek convinced Derek Glasser, who was set to walk on at USC, to come to Tempe as a scholarship player. Glasser ended up starting 104 games in four seasons for the Sun Devils, including 68 alongside a high school teammate that later followed him to ASU — James Harden.

Kevin was viewed as the missing piece for a UNLV team that won at least 17 games in each of the previous five seasons, but had not reached the NCAA tournament over that stretch. Given he often returned to Las Vegas during the offseason to work out and play pickup with some of the team’s players, there was also very little adjustment period needed.

“It was such a unique circumstance: the timing, the fit, all the things aligned so perfectly,” Lon said. “I don’t think it was a normal transfer situation, there was no tension in the locker room, people asking who’s leaving, we were fortunate there wasn’t any of that. It was not typical by any means.”

“The guys that were our leaders were graduating,” Adams said. “Kevin came in, and instantly became our leader. He knew what his father expected. He had the experience of playing four years at Arizona State. He made an immediate impact on everyone, on and off the court.”

UNLV went 30-7 in 2006-07, earning a 7-seed in the NCAA tournament and upsetting 2-seed Wisconsin in the second round before falling to Oregon in the Sweet 16. (It remains UNLV’s most recent trip to the second weekend.) Kevin started 30 games, averaging 13.5 points and 5.1 assists.

“He was the coach’s son, but there was no, ‘Oh this is weird, there’s going to be some favoritism,'” Adams said. “Kevin didn’t come in and step on nobody’s toes. Everything we did, he did. He was part of the team. It felt like he was a Rebel his whole college career.”

That Runnin’ Rebel lineage was cemented in 2021, when UNLV promoted Kevin Kruger to the head coach position after T.J. Otzelberger left for Iowa State. Kruger spent three seasons as an assistant coach under his father at Oklahoma before going back to Vegas in 2019 to become an assistant under Otzelberger at UNLV. Two years later, he was running the program.

“NOBODY CARED AT the beginning,” said Kevin, even recalling an encounter at the Thomas & Mack Center in Las Vegas with Mike Krzyzewski, who said he thought it was great that he was going to play for his father.

“The assumption was that the rule would be more of an exception, someone going back home, playing for someone you know, following your coach. Instead of what it is today,” Kevin said.

Prior to the NCAA passing a one-time transfer waiver, mining the graduate transfer market was arguably the most reliable way to change a roster in the spring. Coaches kept databases and lists of players that had redshirted due to injury or sat out with academic issues, because it meant they had a fifth year of eligibility and could play right away. Two-time transfers weren’t uncommon.

“Even in 2006, when I transferred, people transferred for one of three or four reasons, and minimal playing time wasn’t always one of them,” Kevin said. “There was a stigma to it. Academics? Did he get in trouble? There was a feeling of, ‘Well, why? Why would you leave?’ Afterward, people thought it was still going to be pretty rare. You spend three or four years at a program, you’re not going to leave it.”

The one-time transfer waiver has taken some of the attention away from graduate transfers’ immediate eligibility. But, depending on how the NCAA handles waiver requests for two-time undergraduate transfers this offseason, it could once again become a primary option for programs looking for immediate help next spring.

Sixteen years ago, it would have been difficult to predict the knock-on effect of Kevin Kruger opting to finish his undergraduate degree before his senior season. At the time, it was simply a case of a student-athlete wanting to play for his father.

In 2022, that would be the exception rather than the rule.