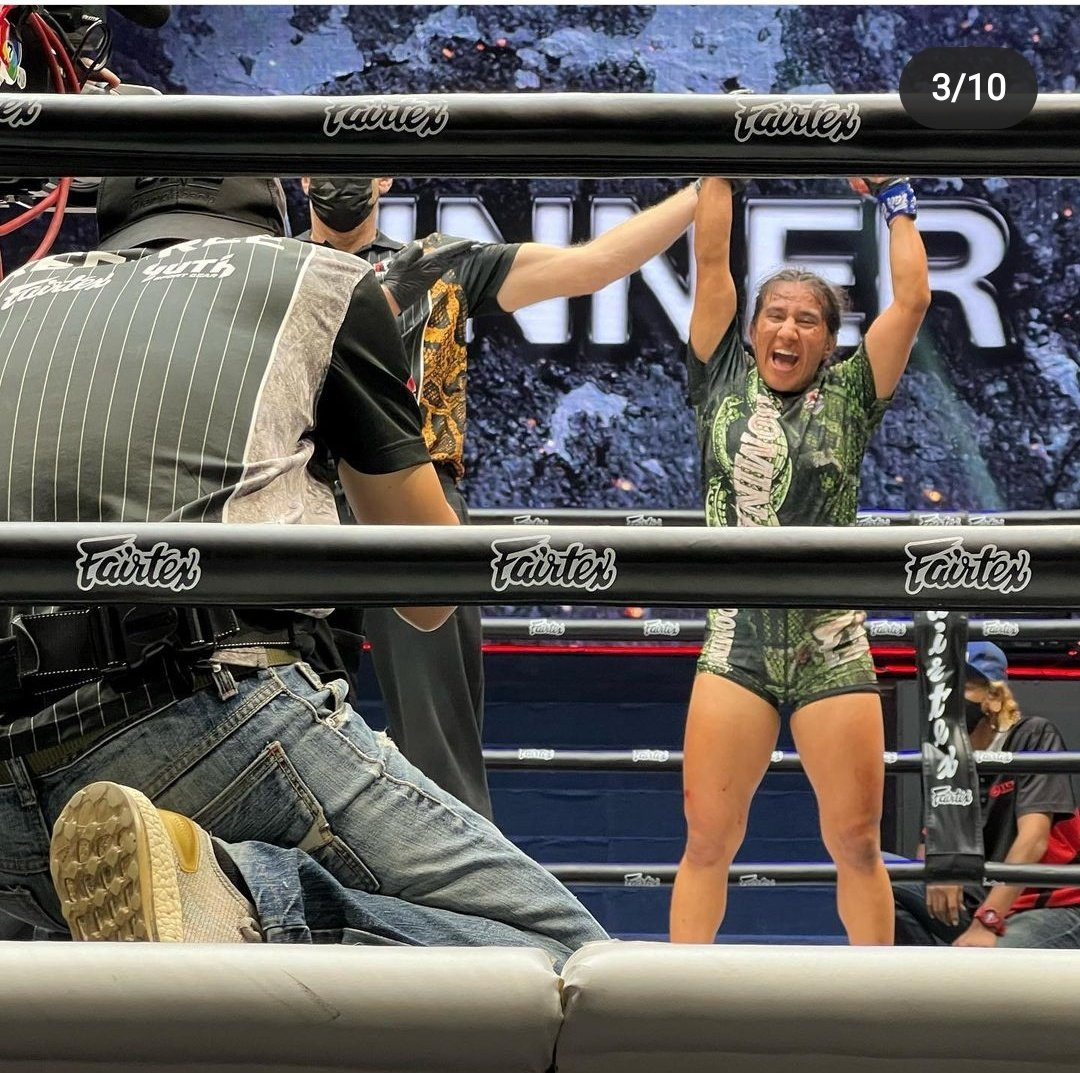 
After the first two punches, I knew I had won, says Pakistan’s only professional female Mixed Martial Arts (MMA) fighter, Anita Karim, who knocked out Australia’s Uyen Ha to win by a unanimous decision under the banner of Fairtex Fight Promotion at Lumpinee Stadium in Bangkok.

The 25-year-old Anita became the only professional Pakistani MMA fighter who has fought at the prestigious Lumpinee Stadium. She named this fight the “biggest fight” of her five-year career. Born and raised in Hunza valley, the fighter made light work of her opponent and dominated all three rounds of the bantamweight fight.

“When I landed the first two punches on Uyen and saw her bleeding nose, I knew I had won. I continued what we had planned for the fight. She was a tough fighter, but the right punches with proper force helped me win the fight on a unanimous decision,” Anita told The Express Tribune.

Anita’s brother Uloomi Karim, who was also her trainer and coach, while talking to The Express Tribune on the phone, said he was expecting the fight to be unique because of the difference in styles. “Uyen was very active on the feet, and Anita was static, but when the opponent started to bleed after Anita’s first two punches, I saw Anita getting confident with every punch she delivered,” he said.

Talking about the opponent, Uloomi said that Anita was going to fight Uyen two years ago, but because of the Covid-19 outbreak, the fight was cancelled. They knew that a fight with Uyen could come in the near future, so they trained accordingly.

“We were mentally prepared to fight her. I tried to work more and more on Anita’s wrestling defence and anti-wrestling strikes,” said Uloomi. “We knew Uyen is a good boxer and wrestler, so we came up with a plan with good movement, not getting hit a lot, not taking damage and then deliver the damage more, keeping the punches and kicks sharp and made sure that we are ready for anything that comes our way.”

Anita has been preparing for this fight from the time the fight was announced – six weeks ago. “[Since] the time fight was confirmed, I started studying the opponent and made the flight plan accordingly. I had one thing in mind I had to hit hard, give my best, make this the best fight and go home victorious. This is what I did,” she said.

She added that her aim was to knock the opponent out with her punches. “I was lucky that I was able to deliver the right punches in the first round and won on the decision,” she said, adding that hearing her name being announced as the winner was the best feeling as this was the best fight of her career.

Anita, who hails from Hunza, was not welcomed in MMA when she joined back in 2017. Her parents were not convinced, and the relatives and neighbours were not happy to see a girl joining this sport, but her brothers, who were already practicing MMA, were confident that she would do wonders.

Today, after she won the Fairtex Fight Promotion, her parents and each family member called to congratulate her. This was a morale booster for her, and now she aims to train every day and improve her technique for better fights.