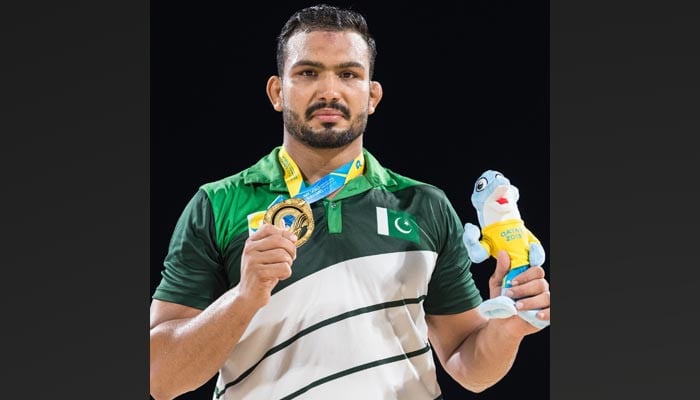 Indian athletes win medals because they are provided with the best facilities by their governments, said Commonwealth Games (CWG) 2020 silver medalist Inam Butt, while highlighting the lack of resources for Pakistani players.

Like any other sport in Pakistan, apart from cricket, the lack of government interest is quite evident in wrestling along with a shortage of funds.

Due to all these constraints, Pakistani wrestlers have to train on their own and participate in international competitions.

Pakistan’s top wrestler, Butt, in a telephonic interview with Geo Super from Turkey, explained this long-lasting sports crisis in detail.

“There are no facilities for us in Pakistan. If you talk about Indian wrestlers, their country spends on them in millions. Our total wrestling budget is around Rs1.5 million,” said Butt, who lost to India’s Deepak Punia in Men’s Freestyle 86kg Wrestling event’s final to finish with a Silver medal in CWG 2022.

“Moreover, Indian wrestlers get international tours for training. Their diet, training everything is totally upgraded as compared to us.

“We don’t have a single world-class wrestling academy in Pakistan whereas India has one in almost every state. This makes a big difference if you understand,” stressed the reigning world beach wrestling champion.

Meanwhile, Butt credited his wrestlers for winning medals despite being overlooked by the government in terms of support.

“We don’t have high-quality facilities back at home, still we win medals for our country. Our players have beaten Indian wrestlers after training in underdeveloped facilities. This clearly shows that there is potential in wrestling but lack of support sets us apart,” he lamented.

Butt, who got injured before the final game against the Indian opponent, said silver was worth it.

“I got a knee injury during the semi-final match against a South African opponent. I had left with very less time to recover from that injury, but there was no choice other than to play for Pakistan. With all the pain in my knee, I contested in the final and gave a tough time to the Indian wrestlers.

“Unfortunately, I couldn’t win a gold, but silver in such a situation was a great achievement for my country. I neither fell nor pulled out,” he said.

Butt thanked his fans for their continuous support and dedicated his silver medal to Pakistan Army Soldiers who were martyred in the Balochistan flood rescue operation.

A knee injury puts Butt’s participation in Islamic Games 2022 in jeopardy. However, the Wrestler is confident to back his fellow wrestlers in the competition.

Message to government for Paris Olympics 2024

The wrestler wants Pakistan’s government to step up and support wrestlers as he believes it’s still not too late.

“We have proved yet again what we can do. Government should identify potential sports and invest in them for the upcoming Paris Olympics 2024.

“If we are given proper facilities and attention, we will win Olympic medals for Pakistan,” the Gujranwala-based wrestler concluded. s