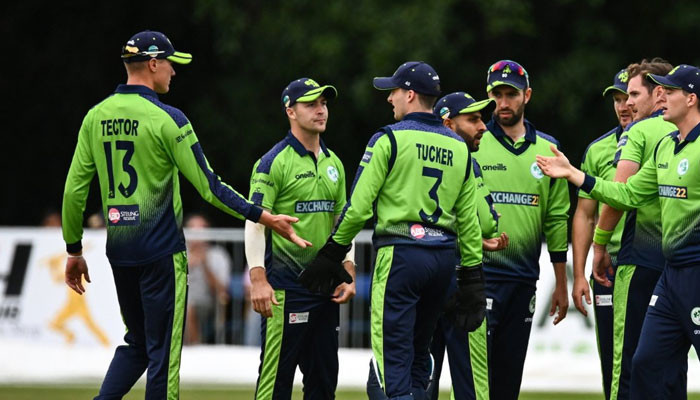 BELFAST: Ireland clinched the five-match Twenty20 international series 3-2 against Afghanistan by sealing a narrow win in the last and fifth rain-affected faceoff at Stormon on Wednesday.

George Dockrell hit the winning run with two balls to spare after Ireland had been set a revised target of 56 in seven overs, with a seven-wicket victory giving the hosts the five-match contest 3-2.

And when Adair dismissed Ibrahim Zadran, he had figures of 3-16, with Afghanistan 26-3 inside four overs.

Usman Ghani, however, led an Afghanistan counter-attack after Josh Little had Najibullah Zadran and captain Mohammad Nabi caught behind by Lorcan Tucker off successive deliveries.

But having made an unbeaten 44, off just 40 balls — including three fours and two sixes — Ghani´s innings was curtailed by rain, with Afghanistan 95-5 off 15 overs.

Off-spinner Mujeeb Ur Rahman had Balbirnie lbw for nine and when he had Paul Stirling (16) caught at midwicket, Ireland were 38-2.

That became 45-3 when Tucker fell to leg-spinner Rashid Khan for 14.

But Harry Tector and Dockrell then held their nerve as Ireland won with three wickets down.