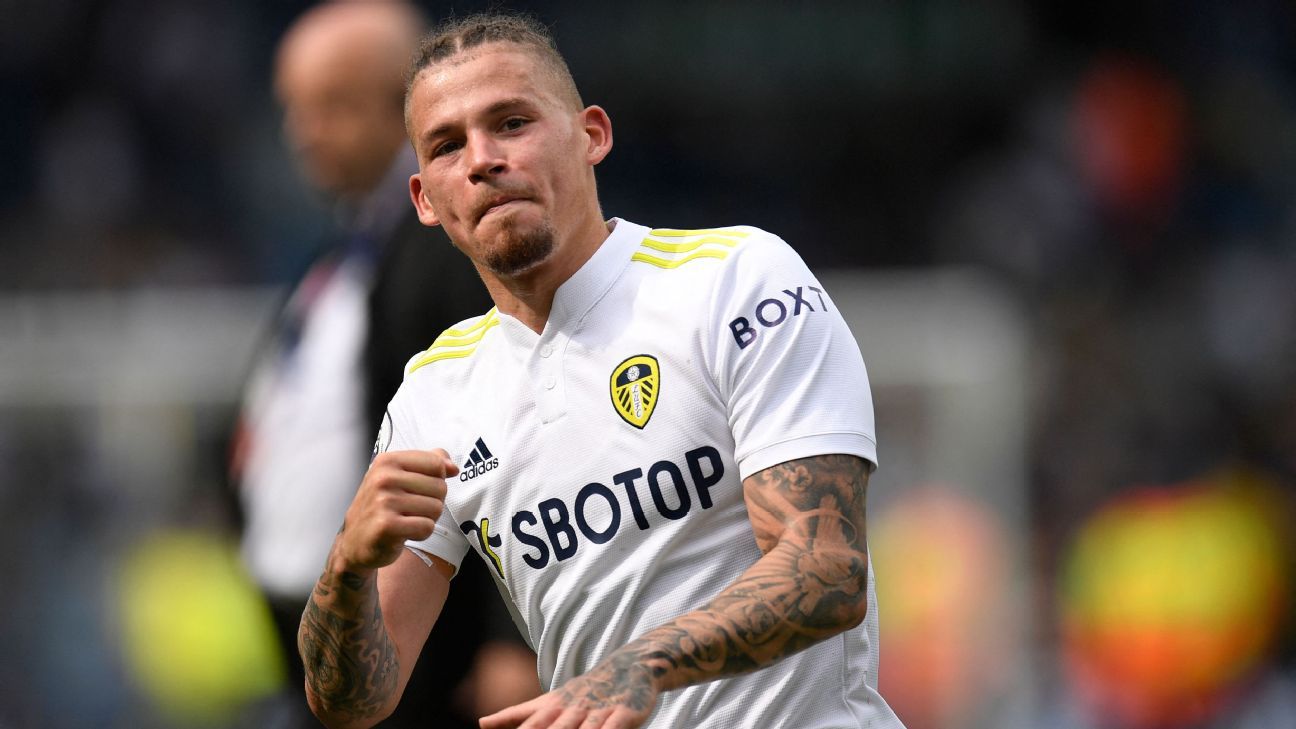 Manchester City are prepared to part with £60 million in an effort to land central midfielder Kalvin Phillips, according to the Sun.

The Leeds United midfielder’s agreement with his existing agent ended last week, and Europe’s top clubs — including Man City — are waiting to see who will negotiate his next contract.

The 26-year-old is believed to be ready to leave Elland Road despite the fact that Leeds are ready to offer him a new contract. Phillips has spent 12 years at the Yorkshire club and has made 234 appearances, but City boss Pep Guardiola sees Phillips as the perfect replacement for the departing Fernandinho.

Guardiola likes Phillips for his dynamic ability to play the No. 6 and No. 8 roles, and because he counts as a homegrown player for City’s Champions League squad registration.

Phillips has become a key player for England manager Gareth Southgate in the last two years, too.

08.41 BST: Barcelona president Joan Laporta is hopeful of extending the contract of young midfielder Gavi, whose deal due to expire in next summer.

“We are optimistic,” Laporta said. “We obviously want Gavi to continue at Barca.”

Gavi, 17, made 34 league appearances for Barca this past season and became Spain’s youngest goalscorer after netting against the Czech Republic in a 2-2 draw in the Nations League last weekend.

“We are close to reaching an agreement,” Laporta said. “It’s more special for us because he [Gavi] comes from our youth ranks. We want Gavi to stay. The player and his agent want it too.”

Meanwhile, winger Ousmane Dembele, who is a target of Paris Saint-Germain and Chelsea, has not responded to a contract offer from Barca with his contract expiring this month.

“Ousmane had a renewal offer from us and we have no news that he has accepted it,” Laporta said.

08.00 BST: Some big news to kick off the week — Benfica have announced that an agreement has been reached with Liverpool for forward Darwin Nunez for an initial fee of €75m.

ESPN’s Adriana Garcia reported on Sunday that Liverpool had agreed to break their transfer record to land the 22-year-old striker in a deal that could be worth up to €100m, if €25m in add-ons are met.

A Benfica statement said: “The agreement provides for the payment of a variable remuneration, so the global amount of the sale could reach the amount of €100m.

“The aforementioned agreement is dependent on the signing of the player’s sports employment contract with Liverpool FC.”

Liverpool have seen off competition from Manchester United and Arsenal to sign Nunez, who moves to Anfield on a five-year contract.

The transfer could have an impact on the future of Sadio Mane, who has attracted interest from Bayern Munich, with Liverpool turning down two offers from the Bundesliga champions for the forward.

– Manchester United and Liverpool lead a number of clubs — including Barcelona, Real Madrid, Leicester City and Everton — in the chase for Udinese‘s 16-year-old rising star Simone Pafundi, according to the Sun. Pafundi made his Udinese first team debut last month, becoming the first player born in 2006 to do so, and was called up by Italy boss Roberto Mancini to attend a training camp. However, his age gives the Spanish sides an advantage: English clubs are unable to sign youngsters from Europe until they’re 18 because of Brexit.

– Chelsea are close to bringing talented American goalkeeper Gabriel Slonina to London from the Chicago Fire, according to Fabrizio Romano. The Blues were close to capturing the Real Madrid target in January but were unable to get a deal over the line. Now, however, after re-entering the race to sign him, Chelsea have overtaken the Spanish and European champions as favourites to land the 18-year-old. Madrid saw an offer for Slonina rejected last week, and it is believed that Chelsea are able to offer more for the highly rated youngster.

– Marseille have enquired about the possibility of taking Arsenal left-back Nuno Tavares on loan, according to the Sun. Tavares joined the north London club for £7.2m from Benfica last summer but has been inconsistent, and now the French side believe they have a chance to land the 22-year-old for the entirety of the 2022-23 season. Arsenal, meanwhile, have contacted Bologna over the signing of highly rated Scotland international Aaron Hickey.

– Juventus are rebuilding for the 2022-23 season and they’re targeting Argentine international Angel di Maria and Shakhtar Donetsk star David Neres, according to Calciomercato and A Bola. Juve have lost Paulo Dybala and Federico Bernardeschi, and Di Maria is considered a principal target. The 34-year-old could be unveiled this week, though Barcelona are also in the hunt. Neres, 25, is another target, but the current war in Ukraine makes signing the Shakhtar Donetsk star slightly trickier. The winger joined the Ukrainian side in January for €15m from Ajax.

– LAFC are about to reveal the arrival of 37-year-old defender Giorgio Chiellini, according to Fabrizio Romano. The former Juventus legend is believed to have completed a move to the MLS side, and an official announcement is looming on Monday. Chiellini terminated his Juve contract and has opted to play in America rather than retire, and he joins a side currently top of the Western Conference after 14 games.