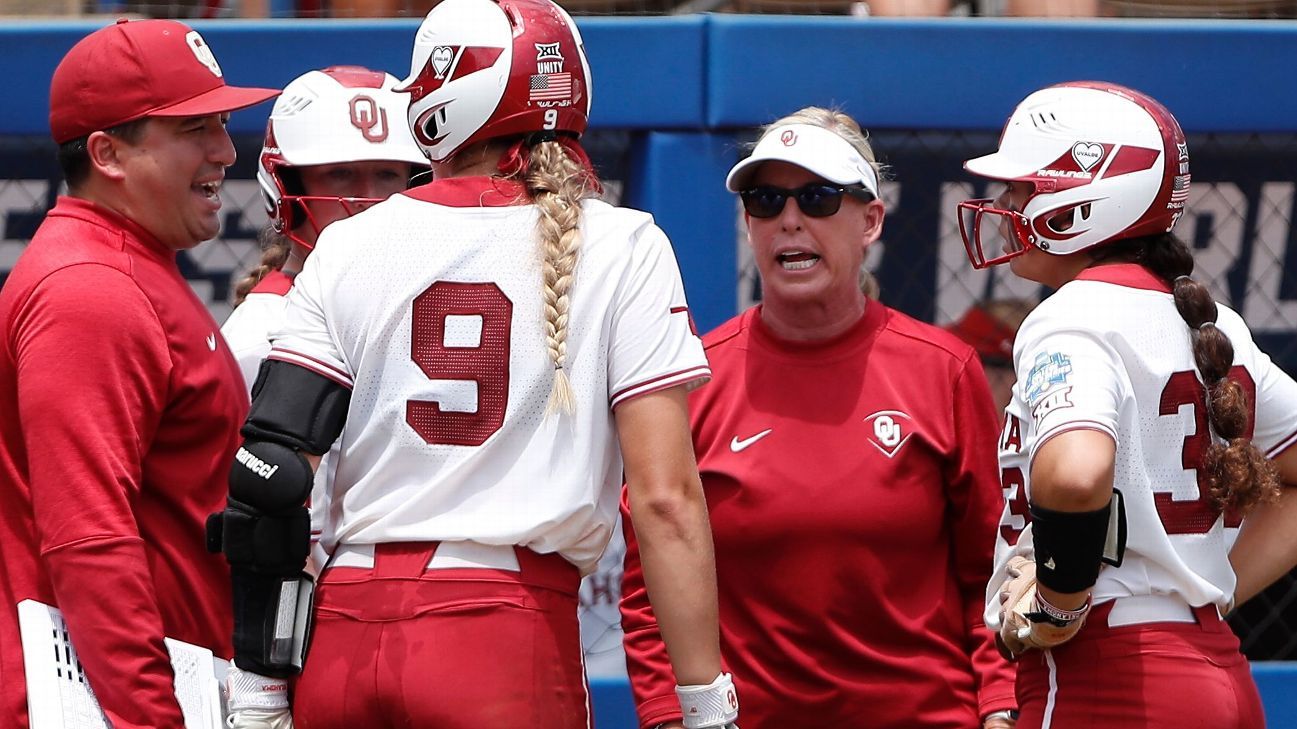 OKLAHOMA CITY — It doesn’t happen often, but Oklahoma has shown that it knows how to bounce back from defeat.

Each time the top-ranked Sooners have lost this season — only three times in all — they’ve gone on to beat their next opponent so thoroughly that the game has ended early via the NCAA run rule.

Such was the case on Monday during the semifinal round of the Women’s College World Series after Oklahoma suffered only its third loss of the season — a 7-3 defeat to UCLA that set up an elimination game later in the afternoon.

Less than three hours later, Jocelyn Alo slugged a pair of home runs, Hope Trautwein delivered a masterful performance in the pitching circle and the Sooners demolished the Bruins 15-0 in five innings to advance to the finals.

It was the largest win by a team in WCWS history and the team’s 40th run-rule win of the season, which is twice as many as the next-closest team in Division I.

Alo said she saw no panic from her teammates in the locker room after the loss and heard only positive affirmations from coach Patty Gasso and the rest of the staff.

“She’s not gonna yell at us,” Alo said of Gasso. “I don’t see the point of that.” If anything, Alo said, the team simply needed to hit reset between games.

“I went into that game with all the confidence that we were walking out with the dub,” Alo said. “No one beats the Sooners twice. I think we really just stuck to our game plan and kind of zoned in on what we needed to do.”

Oklahoma, which improved to 57-3, will face Texas, which beat Oklahoma State twice to advance later Monday, on Wednesday.

The Cowgirls and Longhorns were the only two teams to beat the Sooners this season prior to Monday.

In April, Oklahoma followed up its first loss of the season to Texas with a 10-0 win over North Texas.

Last month, during the NCAA regionals, the Sooners bounced back from a loss to Oklahoma State by pummeling Prairie View A&M 14-0.

Gasso was surprised when she was told during a news conference that her team was 3-0 with a combined score of 39-0 in games following a loss.

She said she felt that the team wanted to show pitcher Nicole May, who took the loss in the first game on Monday, “We got you.”

“They are very prideful and they truly do believe no one can beat them back-to-back — or twice,” Gasso said. “That’s the way they think. So they came out here very calm, very cool. … They were very confident.”

Alo, who set the career home run record earlier this season, clubbed two more homers against UCLA, including a bases-loaded shot in the fifth inning. Her seven RBIs matched a single-game WCWS record.

Alo helped drive in an eighth run when she singled and Jayda Coleman scored on a fielding error.

Trautwein didn’t need nearly as much run support as she got. The transfer from North Texas gave up only two hits and struck out six during a complete-game performance.

Gasso said the chance to see Trautwein step up — and for freshman sensation Jordy Bahl to get 4⅔ innings of work in the first game after missing time the past month with a forearm injury — could be a silver lining to come out of the loss.

“As strange as this might sound, the second game was a blessing for us because of that — to see Hope in that environment, to see Jordy and what she can do for us and to see our team pull up and step up and say, ‘We’re not going home,'” Gasso said. “That was important, especially against a team like UCLA. They’re very dangerous. They’re so good. Well coached. Those pitchers are very good and they’re tough. They’re tough to beat and their hitters are tough to beat. So it seems like we always face each other in these situations, and anytime we play in UCLA, we’ve gotta be our best and they always make us better.

“So the fact that playing against them has to really bring out your best.”