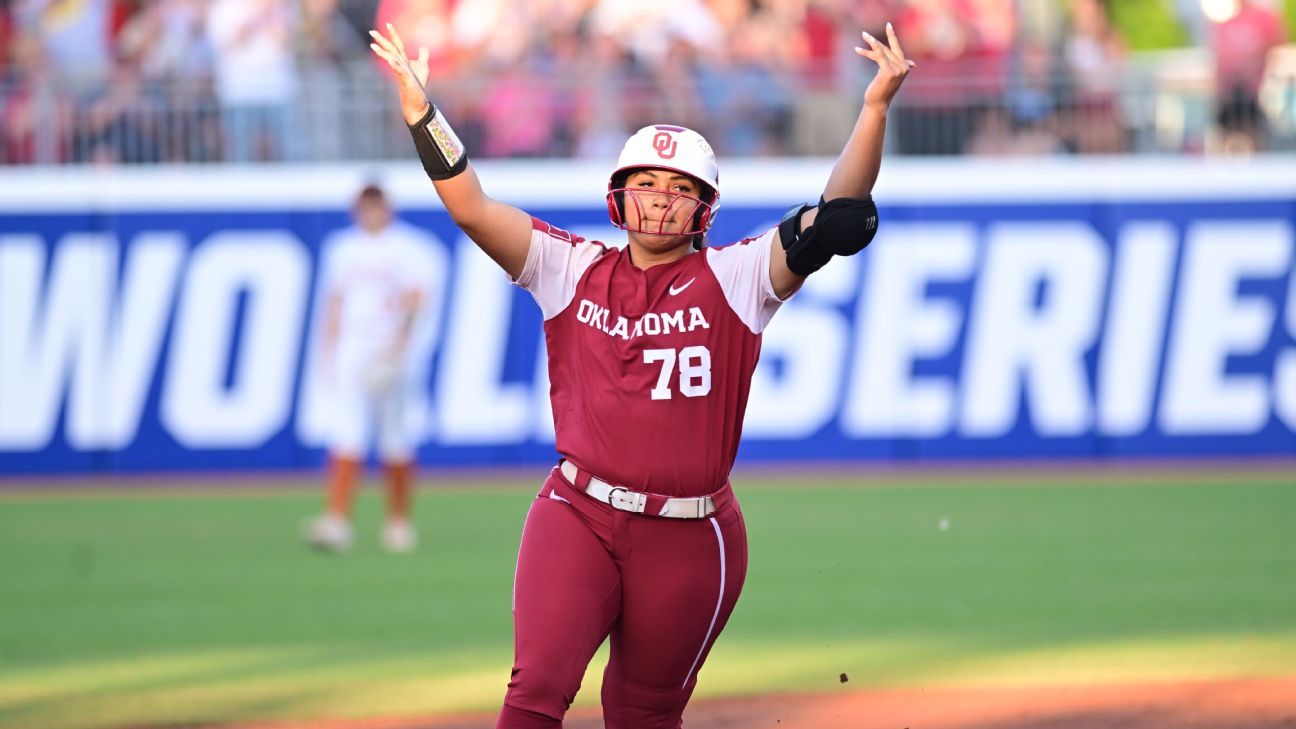 OKLAHOMA CITY – The door opened and a shell-shocked group of players and their head coach walked through the door underneath the site of the Women’s College World Series on Wednesday night.

Texas pitcher Hailey Dolcini sat between teammates, leaned toward the microphone and struggled through tears to explain what happened. A warrior in the circle who helped carry her team to softball’s biggest stage with a quality fastball and an impressive force of will, she couldn’t find the words. There were no answers for how Oklahoma was able to jump out to a four-run lead in the first inning and score every inning thereafter, clubbing a Women’s College World Series record six home runs on its way to a 16-1 win in the opening game of the championship series.

All coach Mike White could do was shake his head as Dolcini, Iakopo and center fielder Bella Dayton finished their time with the media and left. White then stayed behind and did some explaining of his own. It was tough, he said, to go out in front of a 12,234-person crowd of mostly Oklahoma fans and compete against an Oklahoma team that has championship experience, having won it all last season.

“It was like an avalanche,” White said. “Once it starts going, it starts gathering steam, and it’s harder to get it to stop.”

They might have survived Jocelyn Alo’s two-run homer in the bottom of the first. She’s the home run queen with 122 career trips around the bases and counting, after all. It happens. But the chain of events she set off was too much to overcome.

It was reminiscent of something Oklahoma coach Patty Gasso told ESPN a month ago. There’s something about Alo’s home runs that people can’t understand on a stat sheet, she explained.

“She, in one swing, can change the outcome of the game, the direction the game goes,” Gasso said. “Because it’s such a powerful swing, and when the ball is hit out, it goes a looooong way. So momentum just comes into your dugout so quickly and so hard. Just her presence at the plate changes the dynamic of the game. As soon as there’s that contact, everything changes — the crowd erupts, the dugout erupts and just everything changes in a split second.

“If we were behind, now we’re ahead. If there was no score, we’re up by three. And it happens in one swing.”

One moment it was just Alo. Then it was Taylon Snow. Then it was Jana Johns. Then it was Tiare Jennings. On and on and on it went until the casual observer was left to wonder if this is the best college softball team of all-time it was seeing.

Everyone is enamored with Alo, and rightfully so. She has hit a WCWS-record five home runs. She has driven in a WCWS-record 13 RBIs. But look at what happened after her at-bats — after fans sat back down in their seats, after they backed off the net surrounding home plate, trying to record history on their phones.

Two innings after Alo’s first home run, Jennings hit a three-run bomb of her own.

Jennings tied Alo’s WCWS home run and RBI records in the process, and reminded everyone that she has some juice of her own.

Asked if they’re the best power-hitting duo of all-time, Alo said matter-of-factly, “Yes, I think we are.”

Who’s going to argue with that? Alo is only five home runs ahead of Jennings this season. And Jennings actually has the edge in RBIs (86-85).

And if those two weren’t the headliners, someone else would be. Grace Lyons, Jayda Coleman and Jordy Bahl are All-Americans as well. Gasso, who has an embarrassment of riches, thinks people don’t talk about what a good leadoff hitter Coleman is. Her on-base percentage is an eye-popping .589. By allowing Jennings to fall in behind Alo, Gasso said, “That has made them that dynamic duo.”

Grace Green is a relative unknown in the sport. She’s not a starter and she entered Wednesday with only 28 at-bats this season. But she came off the bench and drove in a run in the bottom of the fourth inning.

“It’s hard to get into this lineup,” Gasso said. “I have a lot of great potential designated players, but that’s Jocey’s spot, so where do I feed these other players?”

But first, there’s Thursday night’s rematch to consider. A win will give Oklahoma back-to-back national championships. A loss will force a winner-take-all game on Friday.

Dolcini, Iakopo and Dayton said they have to flush Game 1. Let it go. Move on.

That’s easier said than done. A 15-run loss to an arch rival tends to leave a mark.

“They’re going to put up some numbers, four or five,” White said. “We got to find a way to score seven. That’s the way it is, you know.”

Sure, but is seven runs enough?

Remember, Oklahoma is the Division I leader in batting average and home runs. It’s a team that’s lost only three times all season. Forty of its 58 wins have come by the run rule. (There is no run rule in the championship series, so they played all seven innings.)

Maybe you get lucky and Alo hits a solo home run and that’s it. But can you stop Jennings? Can you stop Lyons and Coleman and whoever else decides to step up that night? It’s whack-a-mole, except the moles are holding metal bats.

They are really freakin’ good.

They are like an avalanche, and the best you can do when it’s coming for you is hope not to get in the way.