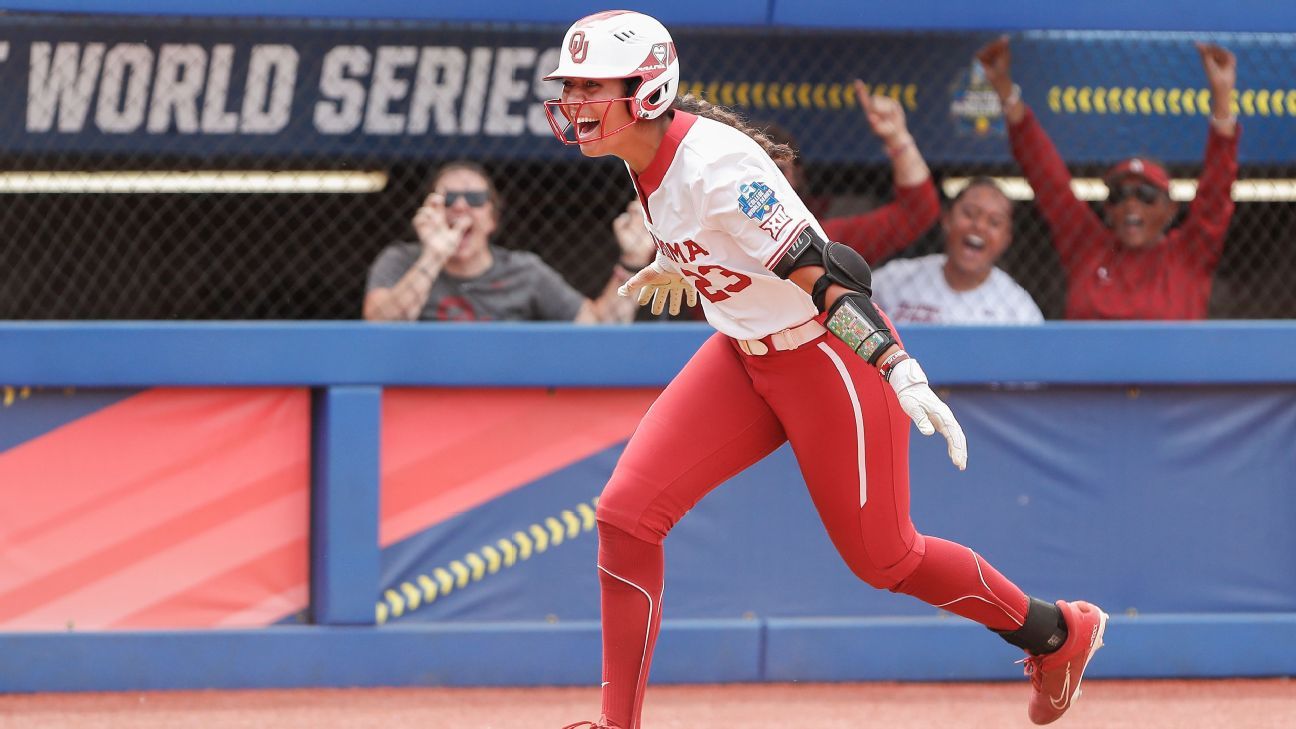 OKLAHOMA CITY, Okla. — Defending national champion Oklahoma got off to a slow start against Northwestern on Thursday as it began its hopeful march toward another championship.

But for Sooners coach Patty Gasso, the biggest victory was the return from injury of her star freshman pitcher, Jordy Bahl, who came in for starter Hope Trautwein to record the last out of the game, throwing 11 pitches, facing 3 batters and recording 1 out.

“She’s made differently in and people see that,” Gasso said. “You like her enthusiasm, you like the way she rips her mask off when she gets what she wants. To see her doing what she’s doing, today, is the biggest victory that we’ve had thus far in the season.”

The appearance wasn’t the sharpest for Bahl, who last pitched on May 6 after suffering what OU said was soreness in her pitching arm. The former No. 1 overall recruit came into the Women’s College World Series with a 0.95 ERA, striking out 199 in 132 innings pitched.

With the Sooners’ next game coming up against Texas on Saturday, one of just two teams to beat the Sooners this season en route to their 55-2 record, Gasso said she wanted to get Bahl back in some game action.

“I really wanted her to feel this atmosphere, especially going into Saturday,” Gasso said. “It’s really thinking ahead and strategizing with a young lady who has been dying to get on this mound and struggling through it. To give her that opportunity was gold, and our team responded to it.”

The Sooners were able to give Bahl that opportunity by clubbing two grand slams — the first by Jennings in the third inning and the second by Johns in the fourth. Trautwein, a transfer from North Texas who came to Oklahoma for the chance to play for a title, gave up a solo home run to Northwestern’s Rachel Lewis in the third inning, giving an Oklahoma opponent a rare lead. According to 643Charts.com, the Sooners have trailed in only 3% of their game action this season. But Trautwein settled in despite five walks, striking out seven in 4.2 innings and giving up just the one hit.

The Sooners’ run-rule win was their 39th of the season, a team record.

Scott had a triple, a double and two singles. She knocked in two runs and scored once for the Longhorns (44-19-1), who hadn’t won a World Series game since a semifinal run in 2013.

Texas advanced to face the defending national champion Sooners in the first-ever World Series matchup between the rivals on Saturday. Texas handed Oklahoma one of its two losses this season, but the Sooners won two of the three games.

UCLA (48-9) will play an elimination game against Northwestern on Friday.