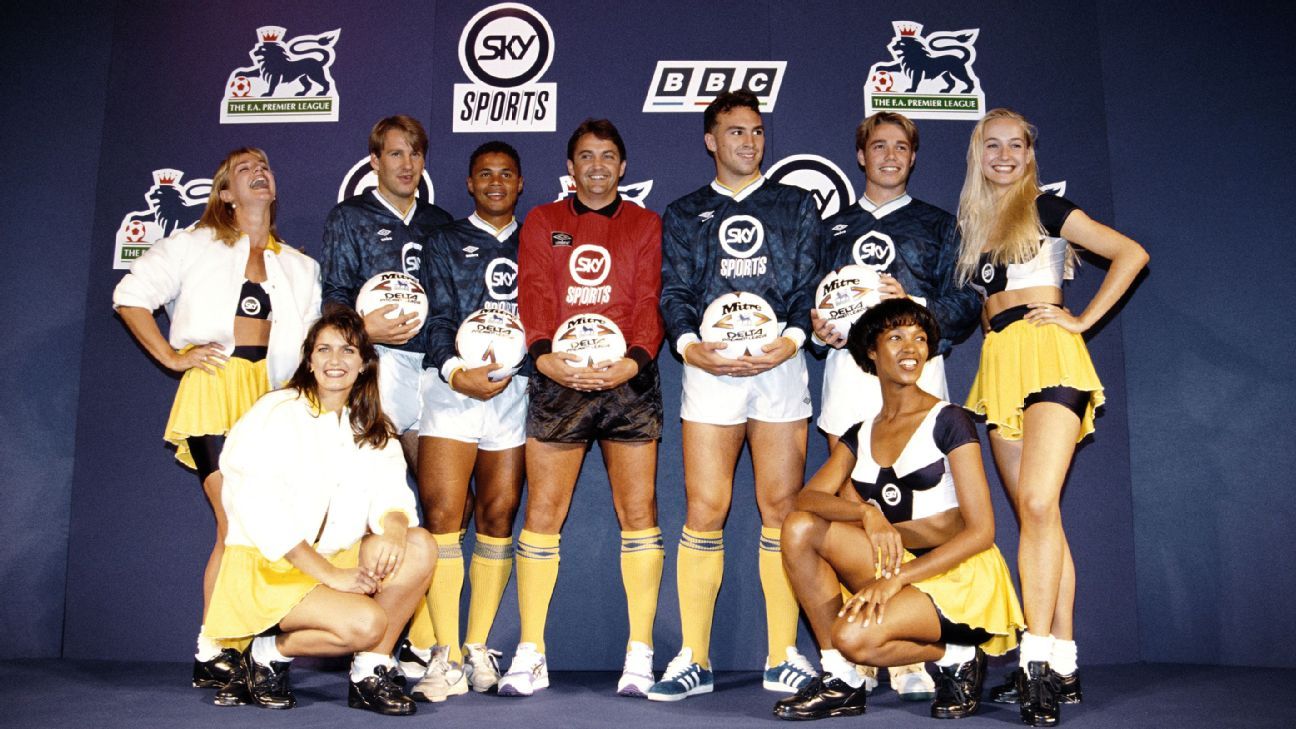 In 1992, the Premiership — as it was then known — looked nothing more than some fancy packaging and clever branding of the old First Division. Games were still being played on pitches of tufty grass which cut up into muddy gluepots in midwinter, unlike the smooth surfaces we now take for granted.

Almost without exception, teams played a 4-4-2 formation with a big target striker up front and a smaller, speedy forward as the foil. The sweeper-keepers we know today, who pass the ball around their own penalty area and act as another defender, would have been laughed out of the team. The football world in those days was not ready for a manager like Pep Guardiola — who was winning the Champions League as a midfield playmaker at Barcelona at the time — and things felt very different.

Fans were cynical about the rebranding of England’s top flight, and football writers complained that the game would be worse off once it was taken over by satellite TV channel Sky Sports, which saw the end of live games on the free-to-air BBC and ITV channels in the U.K.

The players were a little bemused by it all. And managers moaned about the new schedule dreamed up by my bosses at Sky Sports, which included the unheard of idea of “Monday Night Football,” with giant inflatable pigs floating around the centre circle. Yes, really.

Manchester United‘s Neil Webb pulled me aside one day and said: “Why are you lot making us play on bloody Mondays?” And when I rang Howard Wilkinson, manager of defending champions Leeds United, on a Sunday evening he was on the team bus travelling to Norwich and not best pleased, saying: “Your TV company has got us driving through a blizzard to play a game we don’t want to play tomorrow night.”

Perhaps a bit arrogantly, I asked him if Leeds would be returning the £500,000 fee they were getting from Sky for the game. He laughed and said: “Touché.”

As a commentator on this new unloved channel, I felt under big pressure to perform well. Sky’s many critics were waiting with daggers drawn. On the first Monday night TV game between Manchester City and Queens Park Rangers, a routine 1-1 draw featuring a screamer from QPR’s Andy Sinton, my boss David Hill sidled up to me in the tunnel beforehand and whispered: “Don’t mess this up, Darke.” It must have been OK because I kept the job.

Among those who seemed keen to embrace the new era was Manchester United’s manager, then known as plain Alex Ferguson before his later knighthood. Ahead of a game at Southampton, Ferguson agreed to meet me at the team hotel for coffee, we chatted amicably and he even let me know his lineup for that night’s game.

Of course, relations were not always so cordial. Another time Ferguson told us all to “get out of his sight” because he did not care for a feature called “Cantona’s Crimes” run on Sky News.

Back then, many managers would invite you for a cup of tea before the game and were happy to give background information for use on air. Nowadays there is no chance of that happening. Lineups are a state secret; managers and players operate behind a wall of PR people. It has all become so much more corporate. The handful of media men covering a game (I am ashamed to say there were not many women involved in 1992) has exploded with huge global interest and countless social media outlets added to the usual crew of newspaper, radio and TV employees.

Strangely, the games were accompanied by all kinds of gimmicks to sell the Sky brand. Presenter Richard Keys appeared in so many weird jackets that he could have starred in the musical “Joseph and the Amazing Technicolour Dreamcoat.” One bright spark thought it would be a good idea to hire chart-topping band The Shamen to play at half-time at Arsenal, not realising that the group were well-known Spurs fans. They were drowned out by deafening boos.

On the pitch, Manchester United claimed their first league title for 26 years, Liverpool‘s struggles continued after years of domination (they ended up sixth again) and Man City were midtable also-rans who would drop down two tiers by 1999. Arsenal had Ian Wright’s goals but finished a disappointing 10th, Spurs were eighth, and an uninspiring Chelsea came 11th. Indeed, QPR were London’s top club, finishing fifth!

Sadly, the great Brian Clough no longer had the Midas touch and his Nottingham Forest team were relegated. Unfashionable Oldham Athletic were a great story, managed by the amiable and helpful Joe Royle, and defied gravity by staying up thanks to unsung journeymen players like Mike Milligan, Rick Holden and the Norwegian Gunnar Halle. Defending champions Leeds dropped to 17th, just two points clear of the drop.

Dan Thomas is joined by Craig Burley, Shaka Hislop and others to bring you the latest highlights and debate the biggest storylines. Stream on ESPN+ (U.S. only).

The new Premiership baby grew up pretty quickly. Fears that the expanded TV coverage would be overkill proved unfounded and Sky’s approach of making every game a big event started to pay dividends. Fans started to ask what was the “Super Sunday” and “Monday Night Football” game that week. The league started to feel more exciting. More cameras were used and the production became so slick that even the harshest detractors had to admit that the coverage was high quality.

All of this was helped by a wonderful title race. Man United were pushed all the way by Ron Atkinson’s Aston Villa and, surprisingly, a Norwich City side featuring a young Chris Sutton and managed by Mike Walker. (Indeed, Norwich came third and went on to beat Bayern Munich away in the following year’s UEFA Cup.)

Mark Hughes was United’s top scorer (15 goals) and three promising English kids made their debuts: David Beckham, Nicky Butt and Gary Neville. Remember, this was before anyone had heard of Steven Gerrard, Wayne Rooney or Paul Scholes. But a young man named Alan Shearer made waves at Blackburn Rovers, scoring 16 of the 260 goals that were to eventually make him the all-time Premier League top scorer. In that first season though, he finished behind Spurs’ Teddy Sheringham (22), QPR’s Les Ferdinand (20), Wimbledon’s Dean Holdsworth (19) and Coventry’s Micky Quinn (17).

Foreign players were barely around, and long before the likes of Thierry Henry and Cristiano Ronaldo graced the stage, there were only about a dozen — easily the biggest name among them was Eric Cantona, who proved so inspirational in United’s championship win after being signed from Leeds for a bargain £1.2m.

Looking back, football in England did need that new start 30 years ago. Hooliganism and violence between hardcore supporters turned off a lot of casual fans, making games feel unsafe to attend. As it turned out, the “rebrand” seemed to work. The game tidied up its image for the bigger audience with safer, all-seater stadiums, while the TV cash bonanza eventually enabled clubs to bring top players like Henry, Ronaldo, Dennis Bergkamp and Gianfranco Zola to sprinkle stardust.

That long-ago 1992-93 season lives fondly in my memory. It was all so different and none of us could have dreamed that the Premier League would turn into the money-spinning monster it is today. It is my considerable good fortune to have covered this league in every one of its 30 years for Sky, ESPN and now BT Sport. The drama has been unending.