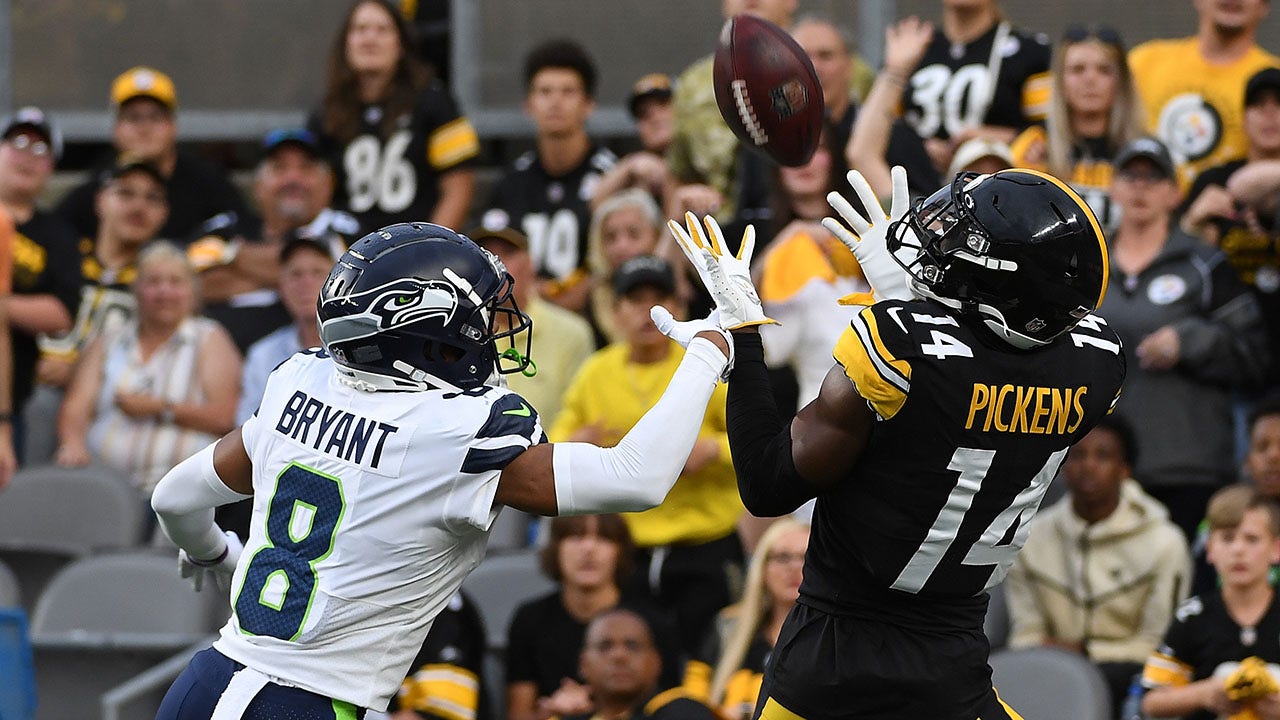 ESPN’s Dan Graziano this week traced an exploding market for the top-paid NFL wide receivers. Equally fascinating is the flip side of that story.

The Pittsburgh Steelers haven’t traded for a receiver since 2003, haven’t drafted one in the first round since 2006, and haven’t overpaid one in forever. Instead, in 11 of the past 15 years, they’ve taken a second- or third-round WR.

George Pickens #14 of the Pittsburgh Steelers makes a catch for a 26-yard touchdown reception as Coby Bryant #8 of the Seattle Seahawks defends in the first quarter during a preseason game at Acrisure Stadium on August 13, 2022 in Pittsburgh, Pennsylvania.
(Photo by Justin Berl/Getty Images)

Pittsburgh avoids the risky $20 million-plus receiver with this philosophy: Wide-open college offenses are producing NFL-ready receivers at a staggering rate. Nothing is more cost-efficient than starters playing on rookie contracts. Keep drafting them, keep churning, don’t fall in love with them. Outstanding quality at great prices is available every draft in Rounds 2 and 3.

Not Just The Steelers

Rashod Bateman #12 of the Baltimore Ravens celebrates a touchdown during the first quarter in the game against the Cincinnati Bengals at Paul Brown Stadium on December 26, 2021 in Cincinnati, Ohio.
(Photo by Andy Lyons/Getty Images)

After trading Marquise “Hollywood” Brown, Baltimore heard the pundits’ cries to sign a veteran receiver. GM Eric DeCosta declined, bringing to camp a dozen receivers, all of them age 25 or younger. The group is led by Rashod Bateman (first round, 2021), Devin Duvernay (second round, 2020) and James Proche II (sixth round, 2020). Aggregate cap charge for the Ravens’ WR room: $6 million.

Similarly, Kansas City GM Brett Veach had decisions to make after refusing Tyreek Hill’s $30 million-per-year demand and trading him to Miami for five draft choices. Veach used one of the Dolphins’ picks on starting CB Trent McDuffie. He used another on WR Skyy Moore, who joins holdover Mecole Hardman and free agents Marquez Valdes-Scantling and Juju Smith-Schuster in a rebuilt WR room that costs only $15.4 million against the cap.

Marquez Valdes-Scantling #11, JuJu Smith-Schuster #9, and Patrick Mahomes #15 look on against the Chicago Bears during the first half of the preseason game at Soldier Field on August 13, 2022 in Chicago, Illinois.
(Photo by Michael Reaves/Getty Images)

Green Bay, notorious for not having drafted a first-round receiver since 2002, is sifting among nine receivers whose aggregate cap charge is $16 million. Chicago and Atlanta, both rebuilding, will each keep their WR cap expenses under $10 million.

BRADY QUINN BLASTS ZACH WILSON HYPE AFTER JETS’ PRESEASON OPENER: ‘THEY WANT SO BADLY FOR THIS TO WORK OUT’

The definition of “premium position” has traditionally been: players who score points and directly prevent points. By that standard, NFL wide receivers have always been a premium position.

But premium vs. non-premium may no longer be the point. In today’s NFL, the real issue is scarcity vs. surplus.

Scarce positions, if there was any doubt, were identified at the top of this year’s draft – the first seven picks were edge rushers, cornerbacks and offensive tackles. Wide receiver, flooded each year with fresh college talent, is no longer a scarce position.

Terry O’Neil is the former Executive Producer of CBS Sports and NBC Sports, and former Senior Vice President of the New Orleans Saints.