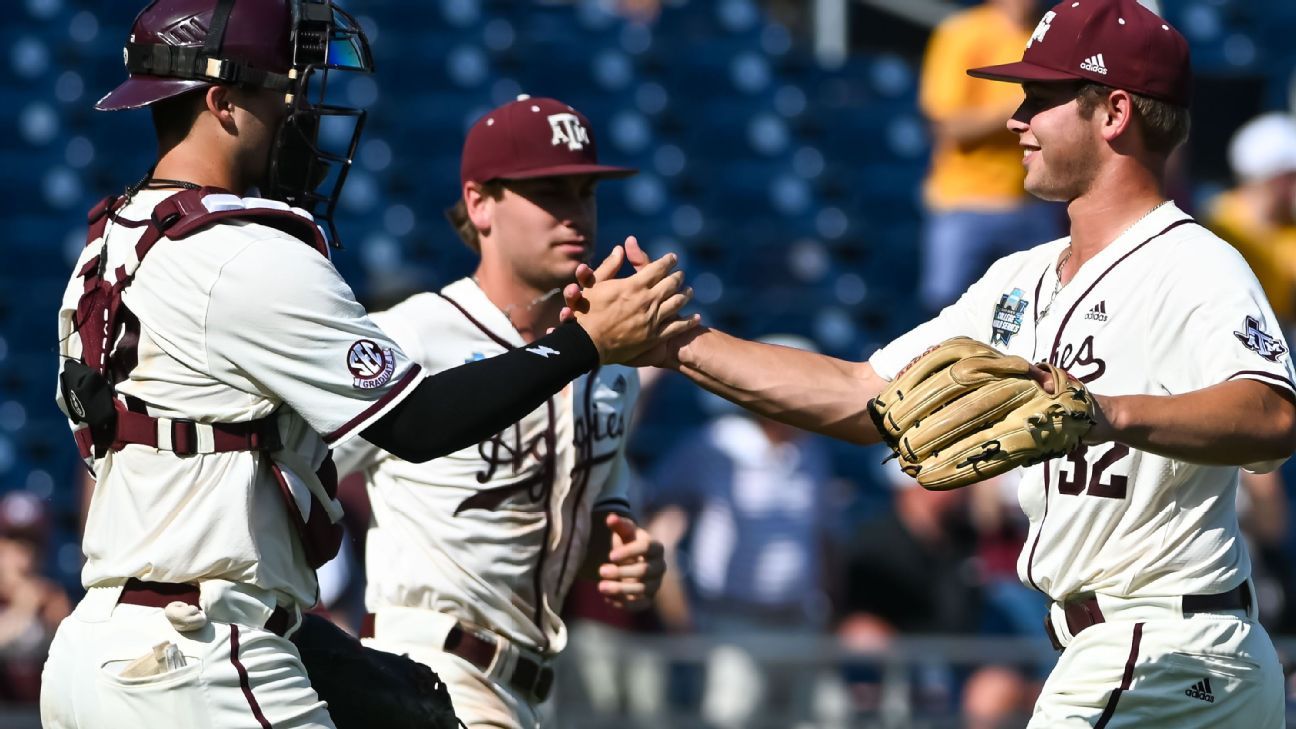 OMAHA, Neb. — In the maddening wait before Micah Dallas took the mound in Sunday’s rivalry showdown against Texas, the Texas A&M right-hander deeply contemplated one piece of advice: It’s just another game.

But it was the Men’s College World Series, and Dallas couldn’t help himself. He charged onto the field after the Aggies’ 10-2 rout and flashed a double Horns down sign.

“It’s kinda something that’s just like breathing: death, taxes and Horns down,” Dallas said. “I mean, there’s no hate toward them at all. They’re a great ballclub.

“If you looked at social media before the game, you’d think it’s life or death. And the fans were just incredible today. Both sides made it fun. You can either let it affect you in a positive or negative way. The older you get and the more experience you have, you can use that energy from the crowd.”

Texas and Texas A&M have been playing baseball against each other since 1904, but the stakes had never been higher than on Saturday. It was the first time they’d faced each other in the CWS, and the loser would go home.

Texas was the team with the bluer blood; it has six national championships and is the winningest Division I baseball program of all time, while the Aggies hadn’t won a CWS game in 29 years.

Dallas, who grew up in Aubrey, Texas — nicknamed Horse Country, USA — was unflappable. In heat indexes that reached triple digits, he appeared to labor in the first two innings, throwing 51 pitches and surrendering two runs.

Dallas said A&M coach Jim Schlossnagle chatted with him after the first inning. “Just keep doing you,” Schlossnagle told him. It gave him confidence, Dallas said. He proceeded to stymie the Longhorns until the top of the sixth, and by then, the Aggies had built an 8-2 lead. Texas staged one last rally in the sixth, when Silas Ardoin and Dylan Campbell singled with no out.

That’s when the Aggies called on Jacob Palisch. The graduate transfer from Stanford struck out the next two batters then walked Mitchell Daly, who yelled, “Let’s go!” into the UT dugout. It loaded the bases for Longhorns slugger Ivan Melendez, who led the nation in home runs and RBIs.

Melendez connected on an opposite-field drive that sailed foul. Fans in burnt orange and maroon and white rose to their feet. Melendez struck out looking on an inside fastball at the knees.

Palisch pumped his fist. Melendez reared his body back in disbelief.

“I mean, I thought we had momentum early in the game,” he said. “We grabbed one in the first, I think one in the second. You just — overcoming big innings has been the story of the last three months. And that popped us today. And I think it just has worn on the position players and feel like at that point just constantly playing uphill. Maybe it just caught up to us, that feeling. We spent a lot of time standing on the field today.”

The Aggies (43-19) appeared to be the looser team on Saturday. They fed catcher Troy Claunch a Pringles chip when he scored in the second inning to tie the score at 2-2. The Pringles routine, or whatever you want to call it, started in March, when the Aggies lost to Houston. Schlossnagle told the team that winning needed to be like Pringles: You can’t just eat one.

Now when they score runs or come up with a big play, they eat Pringles.

A&M fans showed up at the team hotel Sunday morning to send the Aggies off to the team bus. Seth Martin, a College Station resident who sits in Section 203 during home baseball games, fist-bumped the players and headed for the stadium with his own survival kit: a maroon A&M koozie, a vial of bubbles to blow after every score, and, of course, a can of Pringles.

“Can you tell how excited we are? We’re pumped.”

The Texas-Texas A&M rivalry lost a bit of its luster in 2012, when the Aggies moved from the Big 12 to the SEC. For three years, the teams did not play each other. In 2015, they agreed to an annual Tuesday game. Among the major sports, the baseball teams are the only ones that play each other.

But that will change in 2025, when Texas joins the SEC.

Dallas wasn’t thinking about any of that late Sunday. He said he had “conversations” with Texas during the recruiting process but went to Texas Tech. He transferred to College Station after last season, and now, while the Longhorns are headed home, Dallas’ unbelievable season continues.

“When you’re a little kid, you think about playing against your biggest rival on the biggest stage,” he said, “and that’s what happened today.”