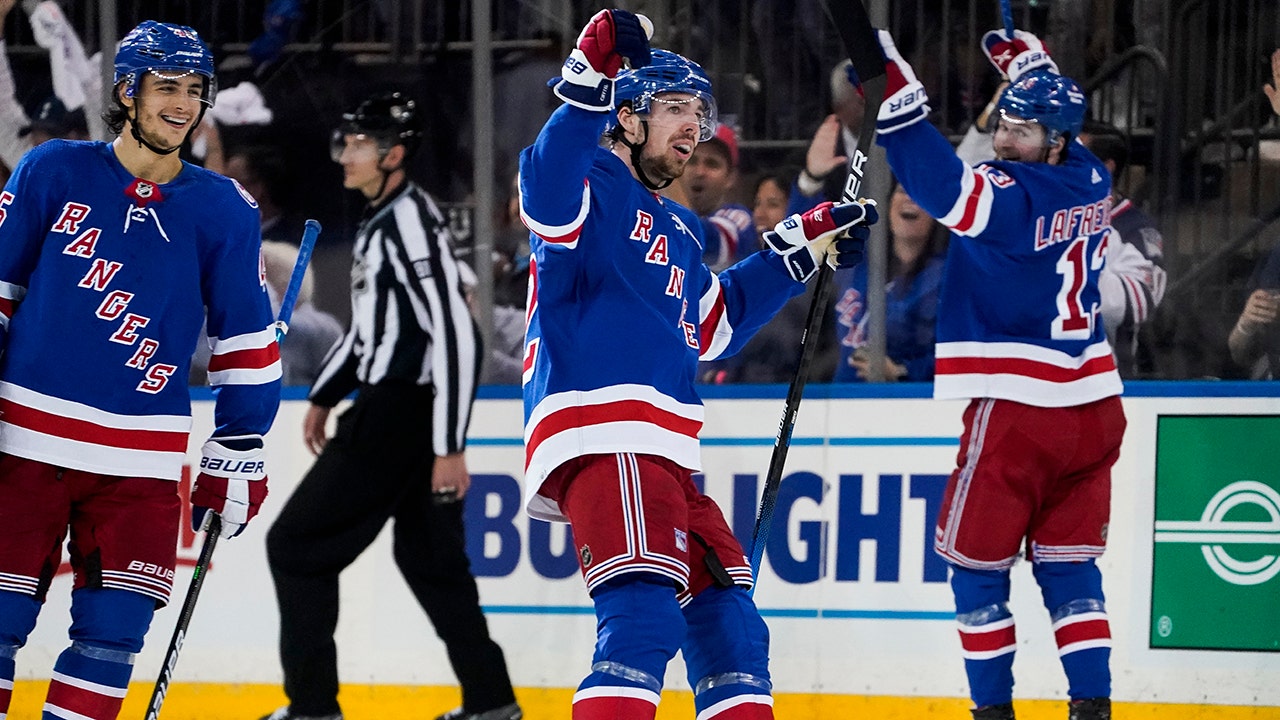 Igor Shesterkin stopped 37 shots and became the fifth goalie in NHL history to have two assists in a playoff game, Filip Chytil scored twice in the second period and the New York Rangers beat the Carolina Hurricanes 5-2 on Saturday night to force a deciding Game 7 in their second-round series.

Tyler Motte and Mika Zibanejad scored in the first period to get New York started, Artemi Panarin tallied in the third and Adam Fox had two assists to help the Rangers set a franchise record with their sixth straight home win this postseason.

Shesterkin had assists on Zibanejad’s first-period goal and Chytil’s second of the second period to give him three assists in 13 postseason games.

New York has not lost at home since a three-OT defeat to Pittsburgh in Game 1 of the first round. The Rangers won their fourth straight elimination game, including Games 5, 6 and 7 against the Penguins.

Brady Skjei had a goal and an assist, and Vincent Trochek also scored for the Hurricanes. Carolina fell to 0-6 on the road this postseason — becoming the first team in NHL history to lose its first six road games in a postseason — to go along with a 7-0 mark at home.

Antti Raanta was pulled after giving up three goals on 13 shots. Pyotr Kochetkov came on and finished with 10 saves.

Game 7 is back in Raleigh, North Carolina, on Monday night. The winner will open the Eastern Conference finals at home against Tampa Bay on Wednesday night.

After the first five games of the series were dominated by strong defensive play, the offenses broke out in this one with both teams scoring multiple goals in the same game for the first time.

Leading 4-2, the Rangers had a 5-on-3 power play for nearly a minute early in the third period. Panarin, just out of the penalty box himself, made it 5-2 when he got a pass from Chris Kreider between the circles and fired a shot past Kochetkov at 7:43. It was his fourth of the postseason and first since the series winner in overtime of Game 7 of the first round against Pittsburgh.

The Rangers led 2-0 after 20 minutes and added to it early in the second period. Chytil got the puck from Fox, skated up the right side and beat Raanta from the right circle. It ended Raanta’s night as he was replaced by Kochetkov.

Skjei fired a shot past Shesterkin for his fifth career playoff goal and first this year to get the Hurricanes on the scoreboard at 5:05. It came on Carolina’s 18th shot.

Chytil got his second of the night and fourth of the postseason on a backhander past Kochetkov through traffic from the left circle at 6:47 to restore the Rangers’ three-goal lead.

Trochek scored on a rebound in front with 7:13 left in the middle period to pull Carolina to 4-2.

Kochetkov had a nice pad save on Chytil’s backhand attempt for a hat trick three minutes later.

Shesterkin denied Sebastian Aho on a breakaway 7:05 into the game, and then stopped follow shots by Teuvo Teravainen and Aho seconds later to keep the Hurricanes off the scoreboard.

At the other end, Motte gave the Rangers a 1-0 lead as he brought the puck up the ice, skated in and beat Raanta from the left circle at 7:22 for his second of the playoffs — and this series.

With Carolina’s Brendan Smith off for high-sticking, Zibanejad extended the Rangers’ lead to 2-0 just shy of the midpoint of the period. He got a pass from Adam Fox, brought the puck across the blue line, deked one defender out of the way, skated in and fired a shot from the right circle through Raanta’s five-hole at 9:51 for his seventh of the postseason.

It gave the Rangers a power-play goal for the fourth straight game, accomplishing the feat in the playoffs for the first time since 2008.