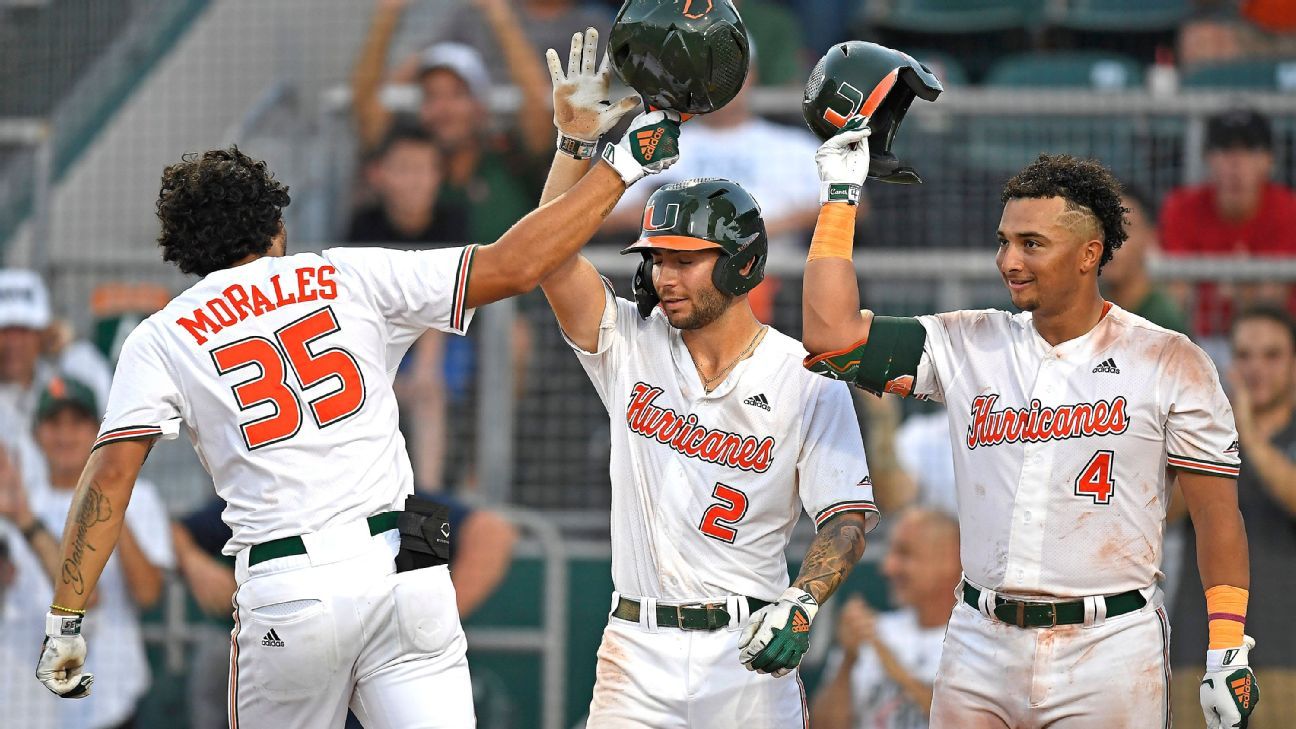 Anyone else out there completely exhausted after the NCAA baseball tournament regionals?

From Sunken Diamond and College Park to the Gulf of Mexico and Rocky Top, there were so many wild, wacky and wondrous regional games being played it was almost too much for our baseball brains to process. Thank heavens for ESPN+ and Squeeze Play, though by the time we hit the wee hours of Monday night/Tuesday morning, analysts Mike Rooney and Chris Burke looked like they’d just spent four straight days getting screamed at North Carolina head coach Scott Forbes. Sorry, Heels — too soon?

It’s never too soon to look back what we’ve just seen, especially when there was too much of it to see all at once. So, without further ado, here are the top 10 superlatives from the NCAA regionals.

The man they call Yo Yo went deep three times at Alex Rodriguez Park in Miami’s opener against Canisius, and his team needed the homers after falling behind by three runs early to the Golden Griffins. Morales rounded the bases in Coral Gables to chants of “Yo Yo! Yo Yo!” even if during most of the weekend he could have made those rounds in a “Row Row,” as in a rowboat because Tropical Storm Alex wouldn’t stop raining on his parades. The Miami native became just the fourth player in the storied history of Canes baseball to smack three round-trippers in a postseason game, joining Scott Lawson (2010), Kevin Brown (2001) and Lale Esquivel (1999). By the way, you’re going to be hearing a lot about that ’99 team over the next couple of weeks. It is the most recent overall No. 1 seed to win the College World Series, a streak Tennessee is trying to end. Speaking of Tennessee, Yo Yo had a Vol-like swagger as he rounded the bases Saturday. Sadly, his team’s season ended on Sunday.

The Falcons made it the Austin regional final against the host Texas Longhorns and had their season end Sunday afternoon, but Coach Kaz wanted to make sure his outgoing seniors got their due, so he brought all eight into the postgame news conference. All will become active military immediately, going from ballplayers to second lieutenants.

Air Force brought all of its lieutenants to the postgame press conferences following its season-ending loss to Texas. pic.twitter.com/yF1bRsUXDI

The Cowboys played two elimination games Sunday and fell behind in both, down 12-0 (!!!) to Missouri State in the afternoon and down 8-7 to Arkansas on Sunday evening. The Pokes won both games, 29-15 and 14-10. That’s 43 runs scored in one day. Last fall the Oklahoma State football team went 12-2 and topped 43 points in one day only twice. If you include the Cowboys’ Saturday loss to Arkansas, they scored 55 runs in two days, which was nearly half of the 115 total runs scored by all four teams Saturday and Sunday. When they scored only three runs on Monday night, they were eliminated by Arkansas. Still, on Sunday you had to think that somewhere Pete Incaviglia paused from chopping down trees with his bare hands and pulling trucks with his teeth to look at the box scores from Stillwater and smiled.

“That is the single best day of emptying the tank from your gut, your heart and your soul as a team that I have ever seen.”#OurStandard I #GoPokes pic.twitter.com/l1rxWXIGCO

The Pirates are the best college baseball program to never make a trip to Omaha. ECU is making its 32nd NCAA postseason appearance and its 17th this century, including seven trips to the super regionals since 2001, but has zero appearances in the College World Series to show for it. On Sunday, the Pirates suffered their first loss in 21 games, but bounced back for a 13-4 revenge win over Coastal Carolina on Monday. Now they host Texas in baseball-rabid Greenville, North Carolina, where they’re already teaching the kids how to greet the Horns … down.

The Diamond Heels were in big trouble against the Georgia Bulldogs in the Chapel Hill regional, clinging to a 6-5 lead in the bottom of the ninth. That’s when freshman center fielder Vance Honeycutt, he of the most North Carolina-sounding name ever, saved the day and perhaps the season with a perfectly timed leap-and-snatch of a would-be tying homer by Georgia’s Joshua McAllister.

The story of what Louisiana Tech has had to overcome over the last four years to become an NCAA tourney participant is truly inspiring, from a 2019 tornado that destroyed their ballpark to a promising season cut short by COVID-19 one year later. In the Bulldogs’ tournament opener in Austin, sophomore Jorge Corona had a pair of home runs, and one of them was an inside-the-park grand slam. Yes, you read that correctly. Your eyes did not deceive you, unlike those of the center fielder from Dallas Baptist.

Best use of junk food: Texas A&M and Pringles

Perhaps the best part of the postseason is the rise of all the weird mascots and lucky charms that show up in the dugout, from Arizona’s taco hat to Tennessee’s fur coat and “Daddy Hat.” But the most delicious lucky charm is in College Station. And no, it’s not Lucky Charms. The Aggies had long been frustrated by their neighbors at TCU, who seemed to repeatedly prevent A&M from postseason glory. So last year they hired away longtime Horned Frogs head coach Jim Schlossnagle. When talking to his new team, Coach Schloss said that hits were like Pringles potato chips, “once you get one hit, you want another and another.” His team turned that into a rallying cry, taking cans of Pringles everywhere they went, getting Pringles T-shirts to wear under their jerseys and munching on Pringles in the dugout. After beating — you guessed it, TCU — to move on the supers, they received a tweet from — you guessed it, Pringles — and perhaps there will be some crispy NIL offerings in A&M’s future. At the very least, they’re getting free cans of chips.

Best way to get banned from the state of Michigan forever: That call at second in the Louisville game

After jumping out to a 7-2 first-inning lead in Monday’s regional final against Michigan, Louisville fell behind by two and was stuck there until the eighth inning. That’s when there was a bang-bang play at second base. The Cardinals’ Jack Payton ripped a ball off the wall in left and arrived at second just as the Michigan shortstop swiped the tag across the base. Payton was called safe, and on video review, it appeared that Payton’s fingers were tagged, visibly causing them to move. However, the call stood. Had Payton been called out, the inning would have ended with Michigan up 9-7. Instead, Louisville’s Levi Usher tied the game with a two-run single and Cameron Masterman followed by mashing a two-run homer to bring home the decisive runs.

I have no clue how even after review the runner was ruled safe pic.twitter.com/dCvlvWpShZ

I haven’t been bashful about my 2022 man crush on Texas State, and why should I be? It’s a gritty bunch of mullet-wearing, mustached, homer-hitting dudes for a school making only its sixth NCAA appearance and its first since 2011. The Bobcats flirted with the top 10 all year, thanks in no small part to shutdown closer Tristan Stivors, the nation’s saves leader with 18. But on Monday night, TSU head coach Steven Tout trotted Stivors out to the mound at Stanford as the starter in a regional final elimination game. It was the first start for the Castroville, Texas, native since he pitched for the New Mexico Junior College Thunderbirds … in March 2019. And he wears No. 13. He went a valiant seven innings with 9 K’s and surrendered only one run, via a second-inning solo homer. But, alas, it wasn’t enough …

I’ve had a very unapologetic man crush on @TxStateBobcats baseball all season. Now in regional final they’re starting the nation’s saves leader, who hasn’t started a game since junior college in 2019 and who wears No. 13. This only makes my love for them stronger. #RoadToOmaha pic.twitter.com/cNbQQQWC8R

There was no shortage of nominees in this category. Central Michigan over Liberty, Southern Mississippi’s 10th-inning single to defeat Kennesaw State in the perpetually bonkers Hattiesburg regional, Coastal Carolina’s closing out of Virginia, and Maryland’s Nick Lorusso with his 11th-inning knock off the wall that defeated UConn and held off elimination on the Terps’ home field Sunday night. But in the end, the biggest walk-off was the hit that walked off the entire round, Stanford’s Trevor Haskins and his #Pac12AfterDark Single Heard ‘Round Palo Alto that eliminated Texas State in the final game of the regionals.