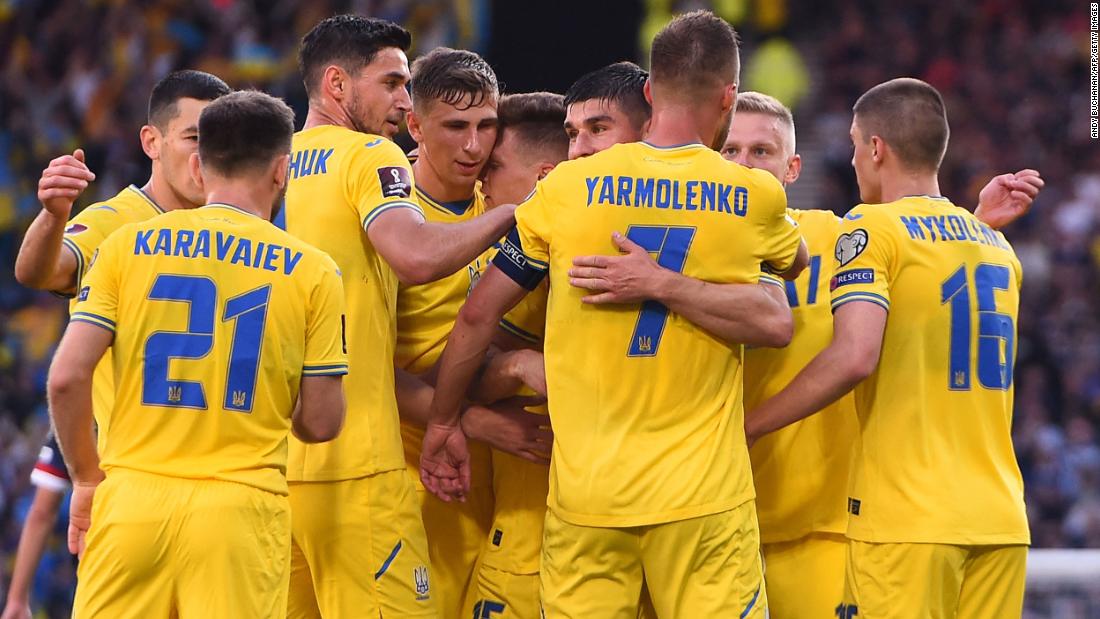 The emotional victory, that brought many watching Ukrainian fans — sporting yellow and blue colors — to tears, puts Ukraine just one win away from qualifying for the Qatar World Cup later this year.

Wednesday’s playoff had originally been scheduled to take place in March, but Russia’s invasion of Ukraine forced the match’s postponement. Ukraine now needs to beat Wales in Cardiff on Sunday in its playoff final to reach the World Cup.

Ukraine was made to suffer more in the second half after Callum McGregor scored with just 10 minutes to play but the visitors added a third goal in stoppage time when Artem Dovbyk ran clear to secure a magical victory.

Given that staying in Ukraine had been too dangerous, the squad have been based at a training camp in Slovenia since May 1 preparing for Wednesday’s game. Prior to playing Scotland, Ukraine’s last competitive game had been in November.

“I have no emotions. All my emotions are left on the football pitch. This victory was not for me, not for the players, it was for our country,” Ukraine’s exhausted head coach Oleksandr Petrakov told reporters after the game.

“We played for those who fight in trenches, those who fight for their last drop of blood. Yes, we took a baby step towards our great aim. We still have the Wales game in front of us and we’ll do everything. We are extremely proud Ukrainians.”

The stirring sound of bagpipes had echoed through the streets of Glasgow hours before kick-off, a familiar sign of support for the Scotland national team.

Historically, the instrument is one of war but the country has also adopted it as a symbol of defiance and those rousing skirls took on a new meaning Wednesday — seemingly playing as much for Ukraine as they were for Scotland.

Many of those fans dressed head-to-toe in Scottish attire — tartan kilt and feather in hat — had made sure to show sartorial support for the opposition, be it wearing a ribbon in Ukrainian colors or blue and yellow socks.

As hundreds of Ukrainian fans picked up their tickets from outside the stadium, supporters shared cultures, taking turns to sing songs and play music from their country.

Normally an item of disdain for many football fans, half-and-half scarves were worn proudly and the away team was clapped out by both sets of supporters as it emerged for the warmup.

Fan groups also worked closely with both football associations in handing out leaflets with the words for the Ukraine national anthem — encouraging Scottish supporters to sing along.

And, although far from perfect, the sound of both national anthems brought the atmosphere inside a sunny Hampden Park to a spine-tingling crescendo.

Ukraine’s team had lined up for the anthems with their country’s flag wrapped around each of the players’ shoulders.

In the build-up to the match, those inside the Scotland camp had nothing but supportive words for Ukraine but had also promised to forget the wider context when stepping onto the pitch.

And when the football started, they stayed true to their word.

Hampden Park was as ferocious as people have come to expect with the crowd booing, somewhat tongue in cheek, when Ukraine kept possession in the early stages.

It was the visitors who got the first chance, goalkeeper Craig Gordon doing well to get his fingertips to Viktor Tsygankov’s fierce shot.

The visitors continued to waste more chances as the away crowd inside Hampden made plenty of noise, realizing their team had a genuine chance of winning.

And then, just after the half-hour mark, they erupted as captain Yarmolenko sprung the offside trap and dinked the ball over the keeper into the back of the net with a deft finish.

It was a goal that was no doubt celebrated by many a neutral.

“Practically everyone on the planet doesn’t want us [Scotland] to win,” said former Scotland player Ally McCoist during BT Sport’s commentary on the game.

There was a genuine sense of disbelief inside the stadium after Ukraine took the lead.

The instructions from Ukraine’s bench were clear; stay calm.

In truth, there was simply no stopping this Ukraine side, perhaps unsurprising given the depth of emotion motivating them.

No sooner had the second half started, Ukraine doubled its lead with Yaremchuk heading in at the back post.

Almost the entire Ukrainian team hurdled the advertising board and celebrated in front of its fans who were quite simply in dreamland.

As the game wore on and the magnitude of what they were about to do started to sink in, Ukraine started showing some nerves.

Scotland, buoyed by the home support, started creating chances and were infuriated after not taking advantage after large spells of possession.

With time ticking on, McGregor finally capitalized on a mistake from the shaky Heorhiy Bushchan in goal and momentum swung Scotland’s way.

This Ukraine team had something more than football to fight for, though, and dug in until the end — eventually extending its lead with the last kick of the game through Dovbyk.

Ukraine’s players were too tired to celebrate though as many fell to the ground, exhausted both mentally and physically at full-time.

Now just one win away from playing in Qatar, there is a real chance Ukraine will be there — something even more significant given Russia are banned from competing.

As the last remaining light began to fade away on a special night in Glasgow, all that was left was the Ukrainian fans singing, crying and dancing in the stands.